All you need to know about the Russian bombers missions against terrorists in Syria.

Beginning on Nov. 17, the Russian Air Force has started pounding Islamic State (as well as rebel forces) in Syria with its Stategic Bomber Fleet.

Tu-22M Backfire, Tu-95MS Bear and Tu-160 Blackjack bombers have carried out long round-trip missions from bases in mainland Russia dropping a wide variety of guided and unguided weapons over terrorists targets: from the FAB-250 iron bombs, to the KH-555 and KH-101 air launched cruise missiles.

On Nov. 20, for the first time ever, two Tu-160s carried out their mission taking off from a deployment base in Kola Peninsula: they flew around western Europe, through the Mediterranean Sea and, after meeting the Su-30SMs departed from Latakia, launched some ALCMs (Air Launched Cruise Missiles). Then, they entered the Syrian airspace and returned home via the eastern corridor: Iraq-Iran-Caspian Sea. A 13,000km journey.

On the same day, Su-34 Fullbacks launched 16 sorties against ground targets in Syria taking off from Krimsk airbase, in Russia.

Interestingly, during their transit across Middle East, the Russian strategic bombers were escorted by Islamic Republic of Iran Air Force F-14 Tomcat, Mig-29 Fulcrum and F-4 Phantom jets whose prior mission to visually observe activity of Russian bombers inside the Iranian airspace, from their entry point to the exit point.

Military aviation historian and journalist Babak Taghvaee has prepared an interesting infographic that provides lots of details about the Russian strategic bombers missions to Syria as well as about the Iranian chase planes.

Click below for a higher resolution version of the file. 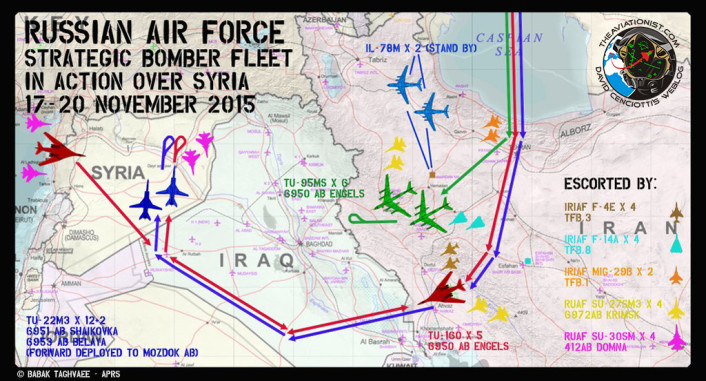 New images show how close to the U.S. carriers operating in the Strait of Hormutz, Iranian planes fly. We have recently published some images showing an F/A-18E Super Hornet escorting an IRIAF (Islamic Republic of […]