A British Special Operation led by a “brand new” RC-135 Rivet Joint aircraft of the Royal Air Force has shut down ISIS comms in Libya recently.

UK special forces have recently carried out “black ops” attacks against Daesh stronghold of Sirte, on the Mediterranean coast, using Electronic Warfare to shut down ISIS communication network in Libya.

The “highly sophisticated” jamming strikes were led by a RAF RC-135W “Airseeker,” one of the three ex-USAF KC-135 tanker converted starting back in 2011 by L-3IS in Greenville, Texas, at a cost of around 650 million GBP (950M USD).

Indeed, the operators aboard the British Rivet Joint first tuned into the militants preferred frequencies and then used the high-powered transmitters to broadcast interference on the same wavelengths, drowning out the enemy’s conversations on the battlefield, according to a source who talked to the Daily Mail.

Whilst the RC-135 jammed the Daesh frequencies from off the Libyan coasts, aboard HMS Enterprise, a GCHQ (Government Communications Headquarters which is the centre for UK’s Signal Intelligence – SIGINT – activities) cyber-warfare team gauged the response to last week’s jamming strike by monitoring exchanges online between IS leaders – who are believed to be in command of up to 6,000 jihadists in Libya.

The defense source told the Daily Mail that the IS fighters “were very angry and couldn’t understand what had gone wrong. We jammed the frequencies for 40 minutes – long enough to prove the capability, but not so long that IS realized what was happening.”

The RC-135W is an intelligence gathering plane that usually monitors communications: the aircraft is equipped with all sorts of antennae and sensors, to eavesdrop enemy signals, transmissions, detect frequencies used by radio and radars and pinpoint sites of interest, mobile stations, SAM batteries, etc.

But, according to the source it also features active EW capabilities and the aircrews “occasionally use jamming strikes to spread confusion among their ranks at vital times.” 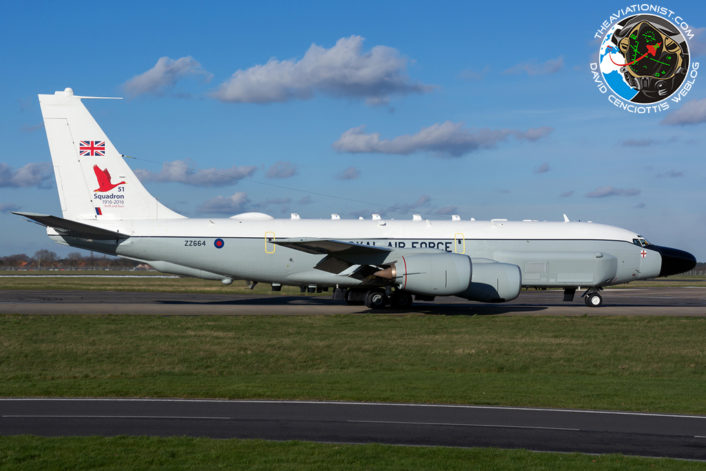 The United Kingdom are the only Rivet Joint operator in the world outside the United States.

The first of three Boeing KC-135R Stratotankers (64-14833) scheduled to be converted to RC-135W configuration for the Royal Air Force arrived at prime contractor L-3 Communications’ facility at Majors Field, Greenville, Texas in December 2010.

British pilots, navigators, electronic warfare officers, intelligence operators and airborne maintenance technicians from No. 51 Squadron all began training at Offutt Air Force Base, Nebraska, in January 2011 undertaking around 2000 sorties and around 35,000 flying hours.

In March 2011 the remaining two Nimrod R.1s that provided electronic intelligence with No.51 Squadron at RAF Waddington were retired from service leaving a three-year gap of having nothing in the UK’s ISR mission until the UK received their first RC-135W ZZ664 in December 2013. ZZ664 was deployed to the middle East in April 2015 and it was expected it would be deployed for around 6 months.

The Second RC-135W Airseeker ZZ665 (ex-USAF/64-14838) was delivered direct from L-3 Communications’ facility in Texas to RAF Mildenhall as ‘SAME 40’ on September 13th 2015. Both RC-135Ws would normally be based at RAF Waddington, Lincolnshire but due to continued runway work there the unit is currently flying from RAF Mildenhall when not deployed on operations.

The images in this post were taken by photographer Ashley Wallace. They depict RC-135W ZZ664 from No.51 Squadron taxiing to runway 29 at RAF Mildenhall for departure using the callsign ‘DRAGNET 41” on a training mission on Feb. 19, 2016, wearing special tail markings to celebrate the 100th anniversary of No. 51 Squadron. 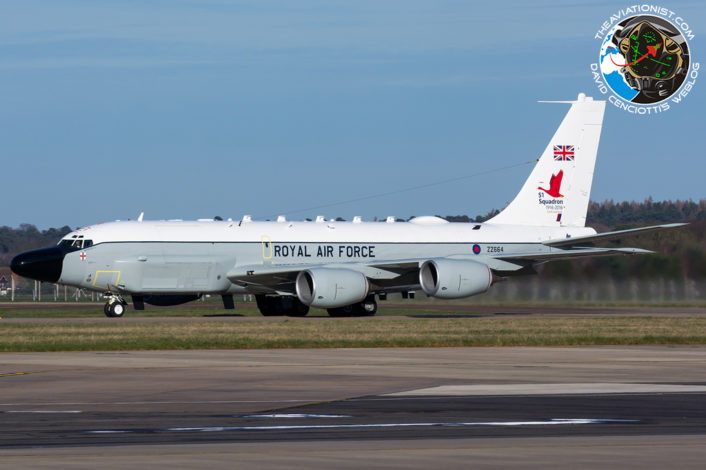 Update: we investigated the Rivet Joint (RJ) jamming capability claimed by the English tabloid’s source with the help of Robert Hopkins, III, a former RC-135 aircraft commander who flew the S, U, V, W, and X models in the 1980s and 1990s, and author of a book on the type.

“After speaking with several of my contacts in the RC community, I think you may wish to consider the story of the Airseeker as a jammer to be, as the TV show Mythbusters says: BUSTED.

Jamming requires massive amounts of power and power requires massive amounts space and weight, which is just not available on the RJ. Buzzing the spectrum hinders simultaneous collection, even on adjacent frequencies, so it doesn’t make sense for both the target and the buzzer to be blind during the process. Part of the reason the RCs have operated with minimal fuss in airspace adjacent to Russia and China is that they are only receiving, not broadcasting. Remember the canard they were equipped with SLAR in the cheeks? Yeah, never happened but every magazine reported it as such for years—was the ASD-1 and later AEELS. If the RJ had a jamming feature the Russians and Chinese would be all over that and they would go public and ugly early.

My best guess, in the absence of the MoD official owning up, is that the Airseeker located the desired frequencies and some other source (air, ground, no matter) did the jamming while the Airseeker listened to the chaos.”

Several aircraft enthusiasts have pointed out that there is a new dome on the E-6B TACAMO The U.S. Navy operates a fleet of E-6B TACAMO (“TAke Charge And Move Out”). The “Mercury” aircraft are extremely […]

The first two UK pilots have begun their training to fly the F-35 at Elgin AFB, Florida. The two pilots are part of a small band of only 30 pilots that are either learning to […]