Some interesting markings were noticed on the fuselage of a U.S. surveillance plane at RAF Mildenhall, in the UK. The reason behind them, is (somehow) unknown.

Traditionally, fighter jets that scored an air-to-air kill sport special markings (that may have the shape of stars, crosses, roundels, downed aircraft’s profile or silhouette, etc) painted on the sides. Similar markings (bombs, missiles, type of target etc) are also worn by fighter bombers to show the amount of ordnance spent by that specific aircraft against ground targets.

During “peacetime” operations, similar markings are sometimes applied to those aircraft that have scored simulated kills during mock air combat training, have dropped a new kind of weapon (on the range, for testing purposes), or have flown a specific mission. Needless to say, the markings which celebrate virtual kills are less significant than those earned during a conflict…..

However, not only tactical planes and fast jets wear these markings, as the image on this post, taken last month at RAF Mildenhall by photographer Gary Chadwick proves.

The photo shows the “mission markings” applied above the crew entry hatch, on the left hand side of the RC-135U Combat Sent 64-14849 “OF” with the 45th Reconnaissance Squadron/55th Wing of the U.S. Air Force: five hammer and sickle symbols along with the silhouettes of four aircraft carriers (outline reminds that of U.S. flattops rather than Russian Navy Admiral Kuznetsov).

The RC-135U is believed to be involved in missions to monitor the Ukrainian crisis since August 2014.

The Combat Sent is one of the most secretive U.S. surveillance planes that can simultaneously locate, identify, and analyze multiple electronic signals. It provides strategic electronic reconnaissance information, performing signal analysis by means of a wide variety of commercial off-the-shelf and proprietary hardware and software, including the Automatic Electronic Emitter Locating System. 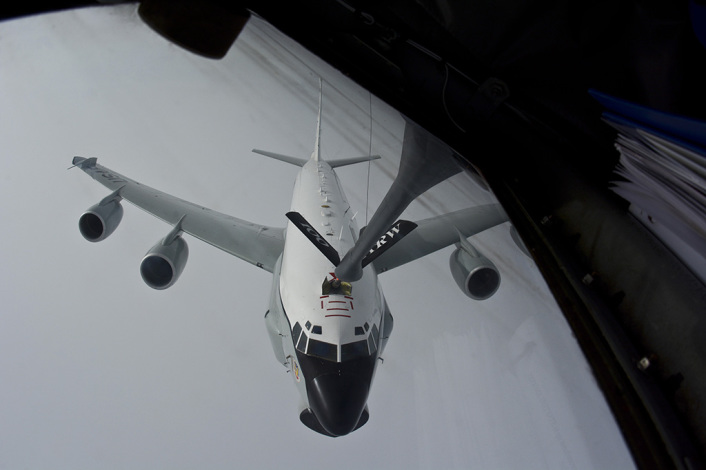 Above: RC-135U refueled by KC-135 over Norway during mission out of RAF Mildenhall, UK, in September

On Apr. 23, a U.S. RC-135U Combat Sent performing a routine surveillance mission in international airspace over the Sea of Okhotsk, was intercepted by a Russian Su-27 Flanker in one of the most dangerous close encounters since the Cold War.

An “unsafe and unprofessional” intercept over the Baltic Sea. On April 14, a U.S. Air Force RC-135U Combat Sent electronic intelligence gathering aircraft flying a routine mission (in international airspace) over the Baltic Sea was […]