RAF Tornados, supported by Voyager tanker and a Reaper UAV, have extended the UK’s airstrikes to Syria.

Hours after the UK parliament approved to extend the airstrikes to include Syria, Royal Air Force Tornado attack planes, deployed to Akrotiri, Cyprus, flew their first raid on terrorist targets inside Syria, early in the morning on Dec. 3.

The Tornados, supported by a Voyager tanker and a Reaper drone, dropped their Paveway IV guided bombs against six targets on an oilfield at Omar, “one of the ISIS’s largest and most important oilfields,” according to the MoD.

The six British “Tonkas” committed to Operation Shader flew their first mission against ISIS on Sept. 27, 2014 destroying the first ISIS target, a “technical” (an armed pick-up truck), in Iraq, on Sept. 30. Since then the RAF Tornado jets, have carried out hundreds of strike (and armed reconnaissance) missions against Daesh targets.

Although the payload may vary according to the type of mission the RAF Tornado GR4s have often carried a mixed load out with a single rack of three Brimstones and two Paveway IV 226kg bombs along with the Rafael Litening III targeting pod.

The Brimstone, is a fire-and-forget anti-armour missile, optimized for use against fast-moving platforms, first fielded during 2008 after an urgent operational requirement and used on the RAF Harriers during operations over Afghanistan.

With a warhead of 9 kg and a range of 7.5 miles, the Brimstones are an extensive redevelopment of the AGM-114 Hellfire and can be used on fast jets, helicopters and UAVs. They use a millimeter wave (mmW) radar seeker with a semi-active laser (SAL) that enables final guidance to the target by either the launching platform or another plane, and are perfect to destroy a vehicle with very low collateral damage risk, and an accuracy of about 1 – 2 meters. That’s why these small guided missiles have become the RAF weapons of choice since the Air War over Libya back in 2011.

Interestingly, one of the 8 RAF Tornados deployed at Akrotiri could be regularly tracked online during its transit from Cyprus to Iraq via Israel, Jordan, accompanied by a Voyager tanker: the example #ZA556 (the only “visible” aircraft in a formation of at least two planes) can be often spotted on Flightardar24.com as it flies into Israel, then into the Jordanian airspace before turning its transponder off to enter the Iraqi airspace.

Here are some of the latest logs:

With the air strikes now covering both Iraq and Syria, the UK has reinforced its contingent at Akrotiri with 10 Tornados and 6 (+3 spares) Eurofighter Typhoon, that have arrived in Cyprus on Dec. 3. The Typhoon FGR4 multirole planes (with their squadron markings stripped off..) belong to the Tranche 2: they can drop Paveway LGBs, but neither the Brimstones nor Storm Shadows yet. 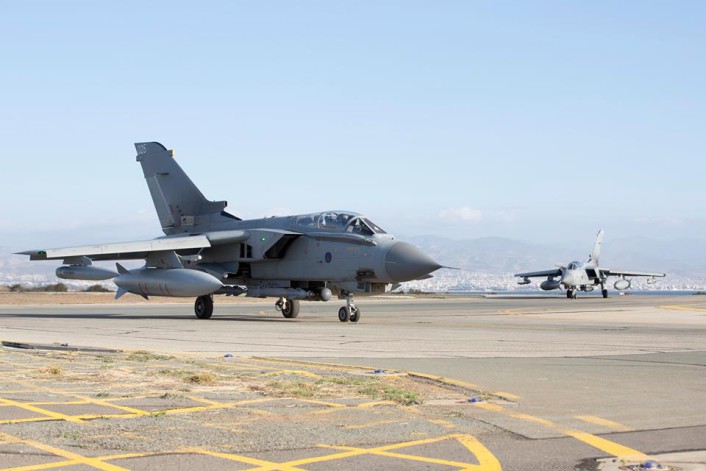 Western pilots approached with remunerative contracts to provide training to Chinese pilots. After reports about British pilots being targeted by China trying to recruit them to train the People’s Liberation Army Air Force, more countries […]