Images coming from Syria show a Su-24 Fencer in flames. And it’s Russian.

On Nov. 24, 2015, the Turkish Air Force shot down what appears to be a Sukhoi Su-24 Fencer that, according to the first reports, violated Turkey’s airspace.

It’s unclear whether the aircraft was shot down by a TuAF F-16 (as some media have reported) or by a Turkish Army anti-aircraft battery but, what really matters is that according to Turkish Presidency, the Su-24 shot down belongs to the Russian Air Force contingent in Syria.

The Su-24 Fencer is a swing-wing attack plane operated by both the Syrian Arab Air Force and by the Russian Air Force that has deployed 12 Su-24M2 at Latakia since the end of September.

The Su-24 Fencer is a supersonic, all-weather attack aircraft developed in the Soviet Union and serving, among the others, even with the Iranian and Libyan Air Force.  It’s twin-engined two-seater plane with a variable geometry wing, designed to perform ultra low level strike missions.

Clear footage of the downed jet over Turkman Mount #Latakia. Anyone can ID? pic.twitter.com/1xU19g4sHt

If confirmed this was not the first Russian planes breached into the Turkish airspace. On Oct. 3 and 4 a Russian Air Force Su-30SM and Su-24 aircraft violated Ankara’s sovereign airspace in the Hatay region. NATO said that the Russian combat planes entered Turkish airspace despite Turkish authorities’ “clear, timely and repeated warnings.” In that case, TuAF F-16s in QRA (Quick Reaction Alert) were scrambled to identify the intruder, after which the Russian planes departed Turkish airspace. Nevertheless, as if violating the airspace of a NATO member was not enough, the Russian Su-30SM maintained a radar lock on one or both the F-16s for a full 5 minutes and 40 seconds. According the Russians, the violation was due to a “navigation error.” Following the incident Ankara said it would shot down any aircraft violating their sovereign airspace as done in the past with the Syrian Mig-23 and Mi-17. Last month there were rumors that a Russian plane had been shot down by the Turkish Air Force near the border that proved to be false.

Update: here’s the radar picture showing both the Su-24 and the F-16 tracks. The violation was quite short (17 seconds). According to the Turkish authorities the Russian plane was issued 10 warnings in 5 minutes before being shot down. 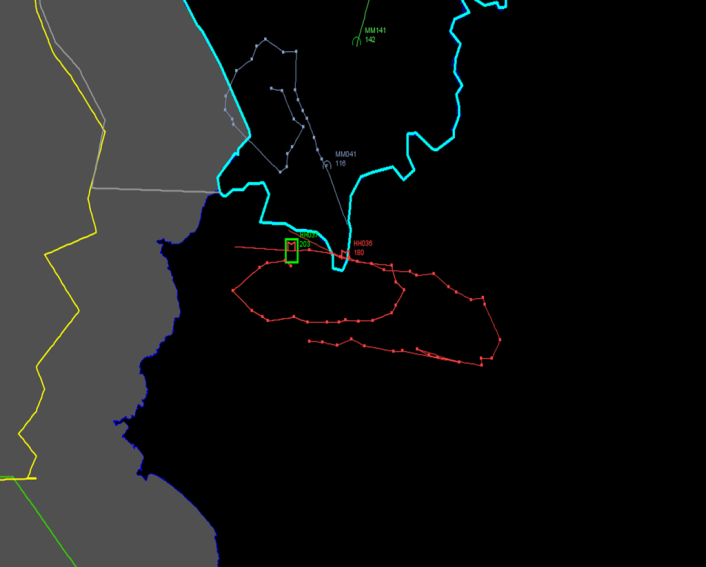 According to the Russian MoD, no violation occurred at all.

#SYRIA During all flight time, aircraft was flying only within borders of Syrian territory. Objective monitoring data shows it — Минобороны России (@mod_russia) November 24, 2015

Both pilots ejected. One of them, whose photo has appeared on Social Media, died. Russian Mi-8 helicopter escorted by Mi-24 gunship from Latakia were spotted searching for the aircrew in Syrian territory:

Update: there are reports (still unconfirmed) that rebels shot down one of the rescue choppers. However, according to ACIG editor Tom Cooper the Russian CSAR helo was heavily shot up by insurgent ground fire and limped back to Russian helidrone at Istamo (south of Lattakia). Reportedly, no crewmember was injured.

Although some pictures of this unbelievable formation have been already published on aviation website, the Russian Knights, Russian Air Force aerobatic display team has released some more images of the weird formation of Russian Su-27s […]