Have you ever wondered what type of subs European or Mediterranean nations operate? Here’s the answer.

Modern submarines are used for a wide variety of tasks: (attacking or) protecting aircraft carriers (as in the case of U.S. Navy subs included in Carrier Strike Groups), defending territorial waters, attacking enemy or merchant ships, running a blockade, gathering intelligence (directly or by means of drones), inserting special forces, as well as launching ballistic cruise missiles (even with targeting guidance of tactical jets) in a conventional or nuclear land attack scenario.

All the most advanced navies operate a submarine force for one or more of the above mentioned missions and in case you were wondering the type/class and number of nuke and conventional subs in in service with European and Mediterranean nations, the infographic, prepared by @Naval_Graphics, is what you were looking for.

The chart also shows the strength of the Russian Northern, Baltic and Black Sea Fleets. Interestingly, at least one Borei-class strategic nuclear submarine is assigned to the European theater.

Borei class submarines will form the backbone for Russian Naval strategic nuclear forces by 2025-2030, replacing several other types of submarines, including the larger Typhoons. Each submarine of the Borei class will be able to carry 16 Bulava intercontinental ballistic missiles, each one with a range up to 11,000 km and able to carry nuclear warheads.

Russian subs often operate near the territorial waters of northern European nations, like Sweden and the UK, with Maritime Patrol Aircraft struggling to locate and track them.

In the recent past there have been concerns that Russian Navy subs could attack key internet communications in future war scenarios, following an unsual naval activity near the locations of undersea cables. 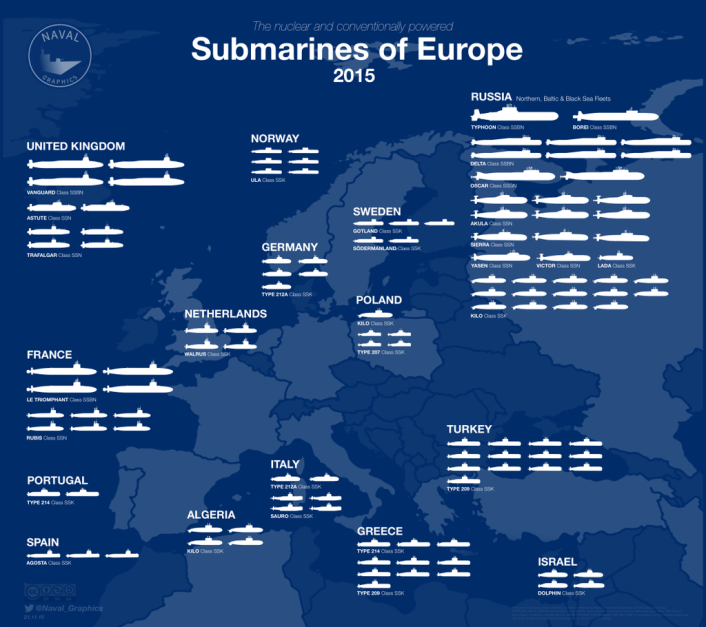 NITKA: The Russian way to train naval aviators (on a ground test simulator)

According to RIA Novosti the Russian Navy is to stop using the NITKA complex in Crimea. The new facility will be open in Yeysk, in the region of Sea of Azov. Mastering arrested landing on […]

From Greece with love: Russia's aircraft carrier flight ops in the Mediterranean sea

If the Chinese aircraft carrier Varyag, serving as a testbed for the development China’s future naval aviation, is far from being a factor, Russia’s flagship Admiral Kuznetsov, a “heavy aircraft-carrying missile cruiser”, equipped with an […]

[Update] Russian Cruiser Moskva Has Sunk In The Black Sea

The real causes of the damage are not clear, as the Russians claim that a fire broke out on board and the Ukrainians claim the Moskva was hit by anti-ship missiles. The flagship of the […]