On Mar. 16, a U.S. F-15E Strike Eagle fighter jet deployed in the Gulf region has conducted an unusual mission: it has dropped some 60,000 leaflets over Raqqa region, the ISIS stronghold in Syria.

The leaflet depicts a gruesome drawing, showing 7 men being lined up for a meat grinder (labelled “Daesh”) by a “Daesh Recruiting Office” (Daesh is the Arabic acronym for ISIS).

The leaflets were released by means of a PDU-5B leaflet canister. 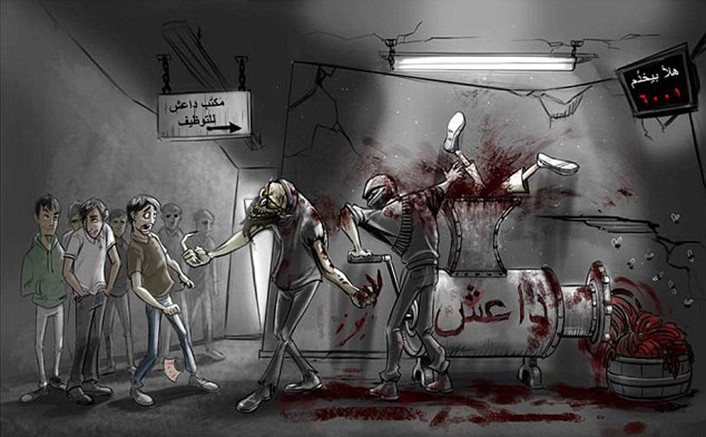 During 2011 Air War in Libya, U.S. Air Force EC-130s broadcast radio messages to the Libyan military, to persuade them to return to their families before it was too late, whereas Italian C-130J aircraft dropped leaflets over Tripoli to counter Gaddafi’s regime propaganda in Libya’s capital city.

Air drop of leaflets in support of Information Operations have been conducted by the U.S. Army above Helmand province, Afghanistan, using U.S. Marine Corps MV-22B Osprey tilt-rotor aircraft to deliver information to areas of Helmand province unreachable by conventional communication.

Leaflets have been also air dropped by Syrian Arab Air Force Mil Mi-8 helicopters over Aleppo in August 2012 to urge rebels to surrender to the Syrian Army.

Israeli A-4 dropped leaflets over Gaza in the past as well.

F-35s played the US Army’s primary CAS providers during Green Flag. And were not shot down in the process

Two F-35 Lightning II took on a primary role as Close Air Support providers during GF 15-08. For the first time, F-35s belonging to the 31st Test and Evaluation Squadron played a major role during […]

Take A Look At These Cool Aerial Shots Of The U.S. B-2 Stealth Bombers Arriving To RAF Fairford Today