A civil plane, en route from Denmark to Poland, almost collided with a Russian spyplane minutes after departure, Swedish authorities said on Friday.

The Russian aircraft was flying with the transponder turned off; the Swedish Air Force scrambled its JAS-39 Gripen jets to intercept and escort the “intruder”, that they identified as an intelligence gathering type (most probably an Il-20 Coot).

According to Flightradar24.com, the flight involved in the near-miss was SK1755, a Canadair CRJ-200 (registration OY-RJK) from Cimber Airlines departed from Copenhagen, with destination Poznan.

Based on the analysis of the ADS-B data they collected, the dangerous close encounter occurred about halfway between Ystad, Sweden and Sassnitz, Germany, between 11:21 CET and 11:25 CET.

Here’s how the incident developed:

At this link you can see the Sk1755 turn to the right to avoid the collision and stop climbing to 21,000 feet. Obviously, you can’t see the Russian plane, as it was flying, in international airspace, with the transponder turned off, hence invisible to civilian radars. 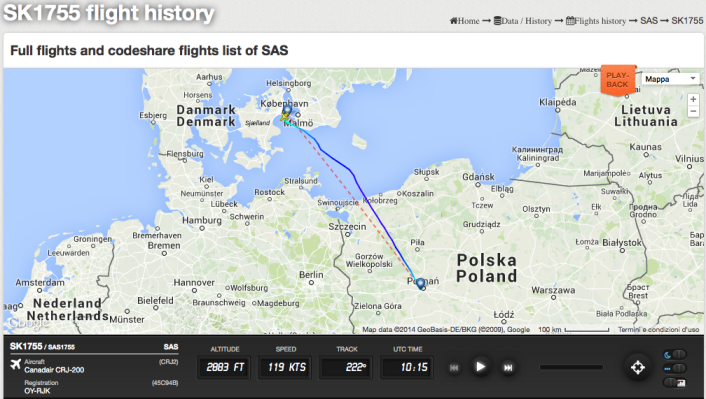 The near collision comes in a period of intense Russian Air Force activity in the Baltics; a surge in missions that are flown without FPL (Flight Plan) nor transponders (sometimes to probe local air defenses readiness) that may pose a threat to civilian traffic in the region.

On Mar. 3, SAS flight SK 681, a Boeing 737 with 132 people on board from Copenhagen to Rome almost collided with an Il-20 Coot, about 50 miles to the southwest of Malmö, Sweden. Thanks to the good visibility, the SAS pilot could avoid the Russian SIGINT (Signal Intelligence) aircraft:the two planes passed 90 meters apart.

Confusion surrounds the causes of the loss. U.S. military says they believe the aircraft was shot down by Syrian Air Defense. Russians mention the proximity of Israeli F-16 Jets and French frigate in the area […]

The Il-20M was shot down off Syria shortly after an Israeli air strike had hit targets in the Latakia Province. Written with The Aviationist’s editor David Cenciotti In the hours following the downing of a […]