In what is just an unfortunate accident, a RAF jet on holding pattern for landing at a UK base drew what someone thought was a giant penis in the sky.

It is “not what it perhaps appears to be” said a spokesperson at RAF Lossiemouth airbase, in the UK, answering questions raised by contrails in the sky that allegedly drew a “giant penis” near the Scottish airbase.

Indeed, it looks like someone mistook the vapour contrails left by one the aircraft based at RAF Lossiemouth waiting for landing on a holding pattern, and thought that a rude shape was drawn on purpose by one of the British pilots.

However, as you can see in the photo below, much fantasy is needed to see something pervert in the so-called “racetrack” flown by the RAF jets at high altitude…

As RAF spokesman said: “people sometimes look into the sky and see all sorts of things.” 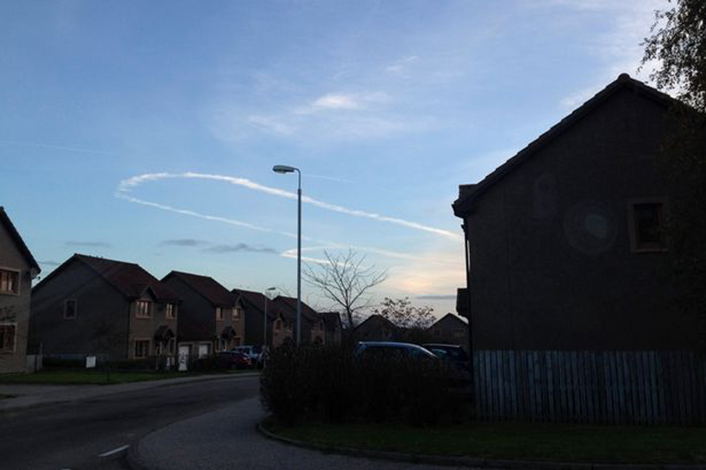 The contrails (short for condensation trails) appear for the quick condensation of the water vapour that is contained in the exhaust of the engines and in the surrounding air (due to a quick decrease in pressure and temperature) and crystallization of it around the solid aerosol particles ejected by the aircraft’s engines. As temperatures where the change of state happens are extremely low (from -40° Celsius), contrails should appear from altitudes around 8.500 meters (in ISA, International Standard Atmosphere, that has a ground temperature of 15° C and a vertical temperature gradient of -6,5° C/1,000 meters).

RAF Lossiemouth is one of the main operating bases within UK, home to both Tornado and Typhoon squadrons.

After A Week of Bad News from the USAF, The RAF Just Said Everything That Needs to Be Said About Gender. Military gender roles have been a hot-point issue even before the integration of genders […]