In the last years I watched the proliferation of pictures showing aircraft flying at high altitudes followed by the characteristic white trails (I discussed this thing in Italian in this post: Scie di condensazione o scie chimiche?).

In most cases, these images have the aim to highlight aircraft that, according to someone, can be associated to weather modification or military experimentation. Usually, those people use the term “chemtrails”, that is the short form for chemical trails, a definition which comes from contrails, short for condensation trails.

Let me say that I’m sure that some kind of testing has been conducted with similar aims and that someone is probably studying the possibility to change the climate somewhere. However, I’m also sure that the majority of the images that have been circulating on the Internet show a normal phenomenon, that has nothing to do with a conspiracy or with the attempts possibly done by some nation to modify the weather using airplanes.

The contrails appear for the quick condensation of the water vapour that is contained in the exhaust of the engines and in the surrounding air (due to a quick decrease in pressure and temperature) and crystallization of it around the solid aerosol particles ejected by the aircraft’s engines. As temperatures where the change of state happens are extremely low (from -40° Celsius), contrails should appear from altitudes around 8.500 meters (in ISA, International Stardard Atmosphere, that has a ground temperature of 15° C and a vertical temperature gradient of -6,5° C/1,000 meters).

Actually, since standard atmosphere is quite different from the real one, contrails can be seen also when aircraft are flying at lower altitudes (I remember watching an F-104 generating contrails above the mountains in central Italy in 1991 at altitudes around 3,000 meters). Furthermore, temperature aside, condensation depends also on the humidity of the air, that influences persistence and form of the trails. The higher the humidity, the higher the possibility that ice crystals create.

Trails are not static, but can expand or narrow depending on the wind (at the same altitude, that is usually different in direction and intensity from the one on the ground). The contrails can be continuos or intermittent, if the aircraft encounters different temperature and humidity conditions.

Obviously, the trails follow the path of the aircraft, and for this reason, if the airplane turns, the trail will simply follow the same “route”. If the aircraft is orbiting, the trail will assume an elliptical or round shape (according to the type of orbit the aircraft is performing). Should you see such a kind of non-straight contrails, you should not worry: there are many aircraft that need to orbit to perform their normal activities (not related to any weather modification test).

Just think to the AWACS planes that have to maintain a particular working area for several hours, to the aircraft involved in testing activities, to the tankers involved in air-to-air refueling activities that follow the so-called racetraks while waiting for their receivers. If many contrails appear more or less at the same time, or in the same place, don’t be surprised: the sky is crossed by hundreds of invisible airways that connect Reporting Points and Radio Navigation aids. This means that who lives next a waypoint or a VOR of an important airway could be overflown by a large amount number of contrails.

If other aircraft flying nearby don’t generate any contrail is also normal: the Air Traffic Control separates the flight both horizontally and vertically and it is possible (if not probable) that some traffic, encountering certain conditions, generates condensation trails, while others do not.

Under a meteorological point of view, even if they look similar to the clouds, the contrails are not associated to any weather phenomenon. They can move, change shape, traslate but can’t bring rain, snow, turbulence etc. On the opposite, the presence of contrails in a particular area could be a mark a high humidity conditions in that zone.
Needless to say, the condensation clouds I explained in a recent post have nothing to do with chemistry or weather modification tests. 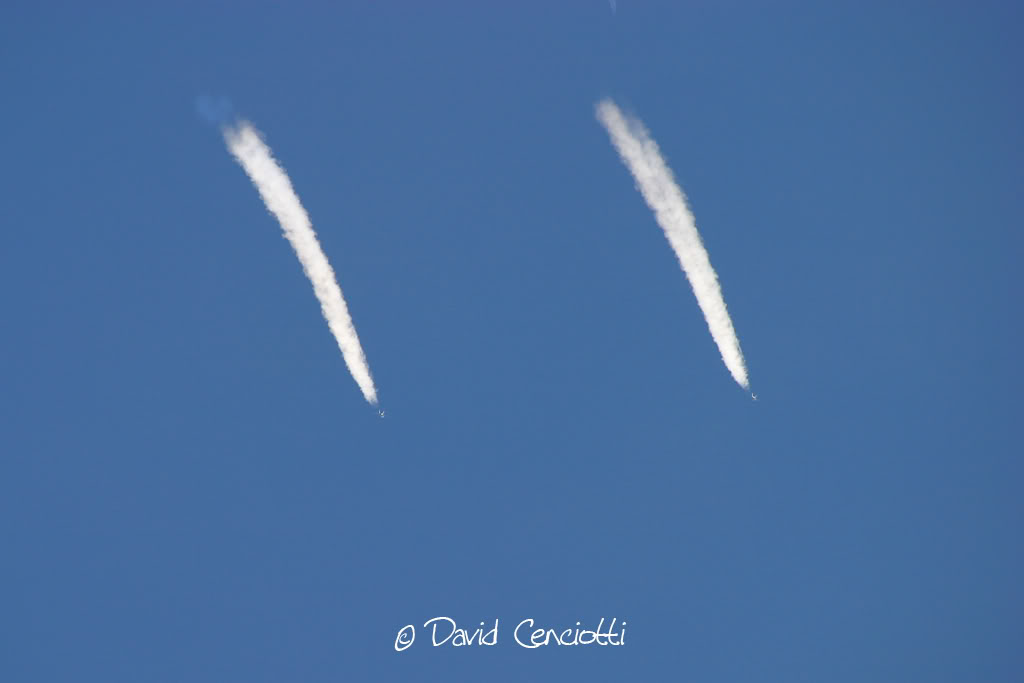 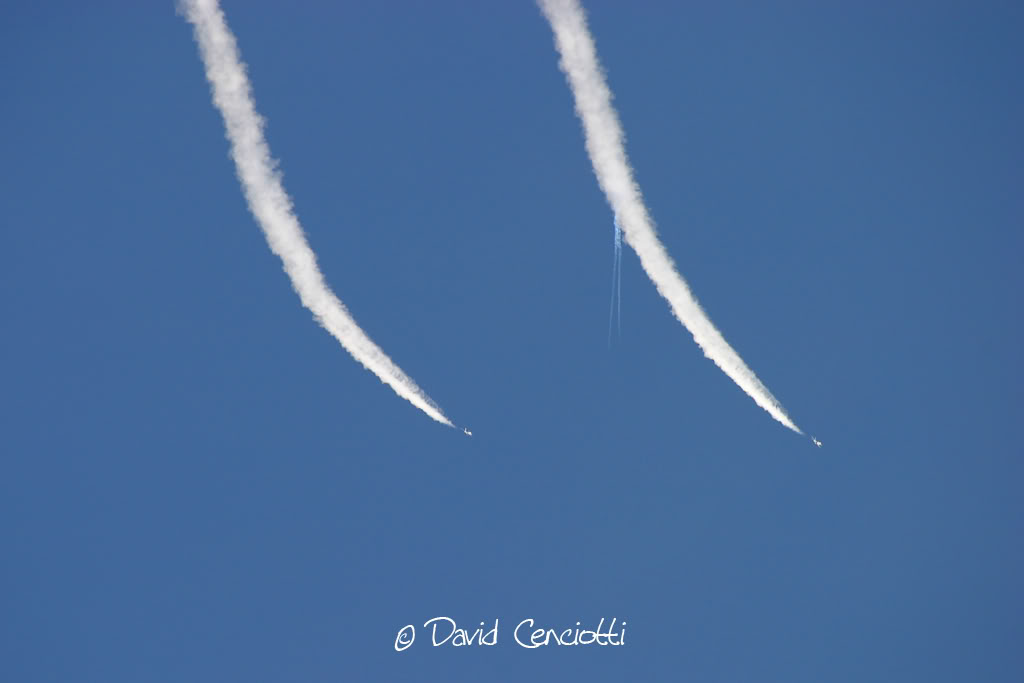 I took the following picture on May 18, 2008 with a Nokia E61i mobile phone (hence the poor quality) from my house. It shows a contrail at night, enlightened by the Moon. 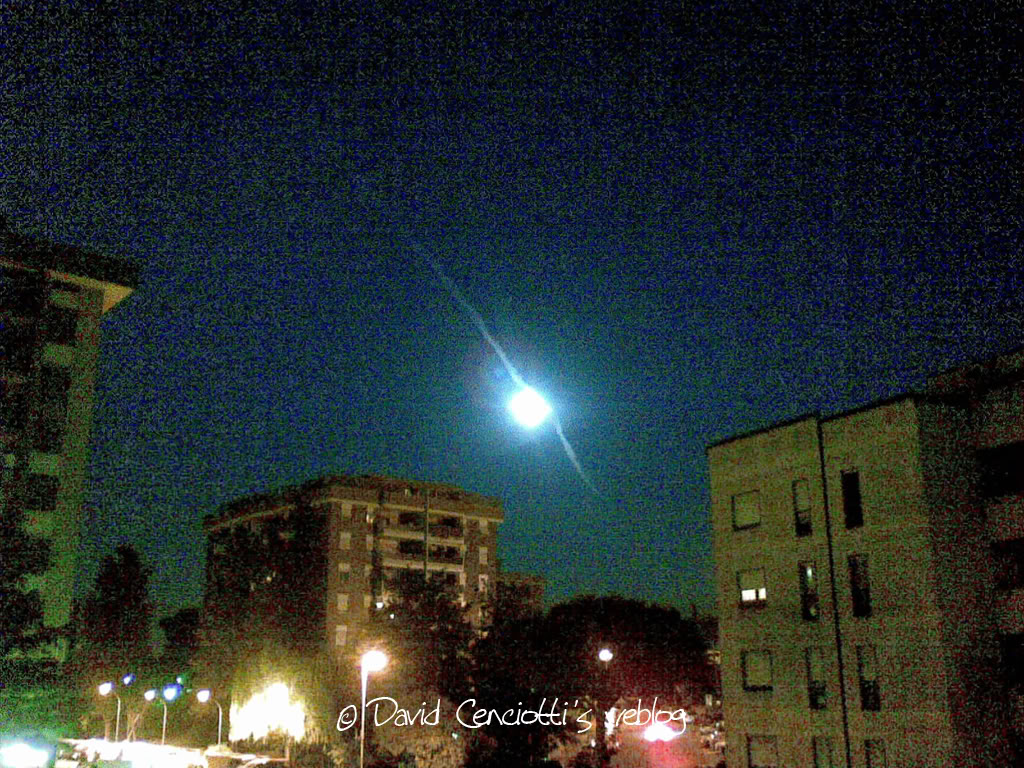 41.89546612.482324
About David Cenciotti
WebsiteFacebookTwitterLinkedIn instagram
David Cenciotti is a journalist based in Rome, Italy. He is the Founder and Editor of “The Aviationist”, one of the world’s most famous and read military aviation blogs. Since 1996, he has written for major worldwide magazines, including Air Forces Monthly, Combat Aircraft, and many others, covering aviation, defense, war, industry, intelligence, crime and cyberwar. He has reported from the U.S., Europe, Australia and Syria, and flown several combat planes with different air forces. He is a former 2nd Lt. of the Italian Air Force, a private pilot and a graduate in Computer Engineering. He has written five books and contributed to many more ones.

The second week of the Ex. Spring Flag has begun on Apr 14. The scenario is always the same and the main difference with the first part of the Exercise is that from Apr 14 […]

Six Swiss PC-21 trainers will stay for ten days in southern Italy to train with the 61st Wing, their Italian counterpart for jet pilot training. The Swiss Air Force is taking part in a 10-day […]