The presence of two Il-78M Midas tankers in Egypt fuels theories about past and future Russian Air Force missions across the world.

A photo taken at Cairo International airport on Oct. 29 proves the Russian have deployed two Il-78M Midas tankers to Egypt. The reason behind their presence in North Africa is still unclear. 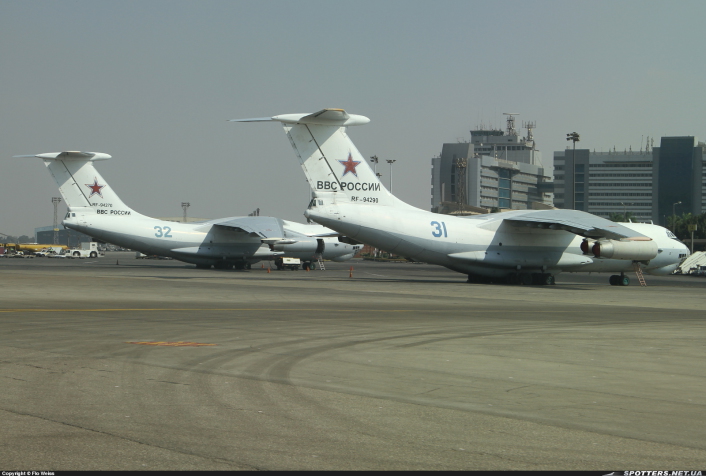 There are chances that the Russians deployed the tankers to Egypt in support of the long range missions flown across northern Europe as far as the Atlantic off Portugal on both Oct. 30 and 31: most probably they were using the tankers to support the trip of the Tu-95 Bear strategic bombers, intercepted and escorted by several air forces including the Portuguese along their way, to the southern Atlantic.

One radio enthusiast on Twitter noted a message being relayed to Bort 94290 (IL-78M) and passing (Heading Easterly) waypoint EVIRA (East of Malta).

Then, according to Tom Hill, a radio enthusiast and reader of The Aviationist, the Tu-95MS and IL-78Ms were active in Voice and Morse Code.

The Russians still use quite a lot of Morse and especially for these extended out of area missions. They send the same short 3 figure tactical messages back to their control in Russia using Morse and Voice. Radio enthusiasts were busy logging the activity last week.

“I just copied the Morse. You can’t really get any info from the Morse as it is short encoded three figure groups. They send the same in Voice. The only thing different here was the IL-78s using the Bort number in voice for the air route over the Mediterranean. Morse Key fit on Tu-95MS radio operators station. On the HF radios you can see 8909 KHz USB set up for the voice transmissions. This is the frequency they use during the Summer,” Hill explained in an email to us.

Even though at least one of the two IL-78Ms (RF-94920) was heard passing a waypoint in the middle of the Mediterranean Sea, it’s still unclear whether it really refueled the Tu-95s that flew to the Atlantic Ocean in Portugal FIR (Flight Information Region), and back (remaining in international airspace).

Was it just a practice for future missions or perhaps the Russians are intending to route Tu-95MS Bear Hs into the Mediterranean?

If so, maybe we are going to see some shots of the Russian bombers as those taken by the Italian air force pilots during their Cold War intercepts.

The puzzle is also: how did the IL-78Ms get to Egypt? Did they deploy through the Gibraltar Straits or did they take the Iran, Iraq and Syria route? Possibly the Iranians were a bit twitchy about combat aircraft such as Tu-95s deploying but they allowed the tanker support?

Tom Hill has contributed to this article

Updated: Turkey has just shot down a Russian Sukhoi Su-24 near the border with Syria

Images coming from Syria show a Su-24 Fencer in flames. And it’s Russian. On Nov. 24, 2015, the Turkish Air Force shot down what appears to be a Sukhoi Su-24 Fencer that, according to the […]

A Tu-214SR circling from a few hours over Sochi for the opening ceremony. The Tupolev Tu-214SR is a Special Mission Aircraft of the Russian Air Force. Although few details about this special plane are known, […]

From Russia With Love: Our MAKS 2017 Report From Zhukovsky

Last week we have attended the MAKS 2017 Aviasalon in Moscow, held at the Zhukovsky/Ramenskoe airfield. MAKS is probably the only event where you can see all the latest Russian hardware (including the PAK FA) […]