During the early days of Vietnam Conflict, the US developed a special kind of attack aircraft to stop the flow of enemy troops and supplies: the gunship.

The Gunship aircraft, born from the conversion of cargo aircraft into powerful aerial weapons armed with big guns, were based on the concept of the circling attack.

In other words, the guns were mounted on the left side of the gunship so that the plane could fly a bank circle, achieving a good accuracy in strafing the target by using high velocity guns with a caliber of at least .30.

The first two types of gunships developed by the US were the twin-engine piston powered Douglas C-47 Skytrain and Fairchild C-119 Flying Boxcar, but the final leap was made relying on the size, speed and heft of the Lockheed C-130 Hercules which became known in the gunships world as the AC-130 Spectre.

The first AC-130As were deployed in Vietnam in 1968. They were armed with two 20 mm and two 40 mm cannons and they flew their first missions teamed with F-4s, which had the task to attack and destroy with cluster bombs the enemy AAA (Anti Aircraft Artillery) that opened fire against the gunship.

During the first missions  the Spectre was also able to achieve an aerial victory when on May 8, 1969 an AC-130 shot down an enemy helicopter, as told by Wayne Mutza in his book Gunships The Story of Spooky, Shadow, Stinger and Spectre .

But the AC-130s were best and widely used from October 1969 to April 1970, the so called dry season, during which the NVA (North Vietnamese Army) trucks transported ammunition supplies by using the Ho Chi Minh Trail.

Spectres crews, that had the task to hunt trucks, were able to destroy and damage 25 of them in one mission: among these there were also AAA vehicles and, some times, the gunships came back to the base badly damaged. In the 1969-1970 dry season the NVA moved about 68,000 tons of provisions on the Trail, 47,000 tons of which were destroyed by the 12 deployed AC-130s with their 20 mm high density rounds and 40 mm Bofors cannons.

The 1970-1971 was even busier for the gunships since American and South Vietnamese soldiers began moving into Laos: in fact, while the numbers of AC-130s increased from 12 to 18, the western part of the Trail became filled with an always increasing number of vehicles coming from east, where interdiction sorties had concentrated. Therefore, during this period a gunship could destroy more than 25 trucks per night and the 1970-1971 dry season ended with 58,500 tons of material destroyed.

By the end of the 1971, after the NVA increased the number of the armored vehicles and the caliber of guns along the Trail, the U.S. deployed the first example of AC-130E.

As explained in detail by Wayne Mutza in his book, the new Spectre model was armed with a new more potent gun, the M102 105 mm Howitzer which replaced one of the Bofors cannons on the left side of the gunship.

The first Howitzer was installed in a gunship after it was repaired from some battle damages. Since it could fire from a distance of 12,000 meters, the Howitzer highly increased Spectre stand-off capabilities: the result was a higher kill ratio against trucks, since a vehicle hit by a 105 round had only a 10% chance to be still operable.

During its first Vietnam deployment this single howitzer-mounted AC-130E destroyed 75 trucks and damaged 92 ones with the 105, and destroyed 27 vehicles and damaged 24 ones with 40 mm fire in 32 missions. 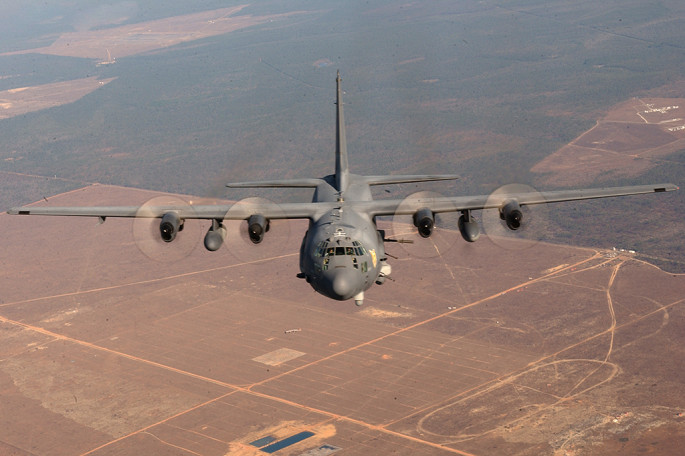 Last month we published a stunning image showing a Hellenic Air Force C-130 flying with another plane of the same type, wearing the typical camouflaged color scheme still used by many Greek planes. Even if […]

A mix of Raptors and Eagles can be pretty deadly, even if outnumbered by enemy fighters. More than 250 airmen and 9 F-15 Eagle jets from the 104th Fighter Wing, Massachusetts Air National Guard, deployed […]

Two U.S. Stratofortress bombers caught during a low passage at Gando airbase. On Mar. 4, two of the U.S. Air Force B-52 bombers deployed to Spain performed a low flyby over Gran Canaria island, in […]