According to the Ukrainian MoD, the two attack planes were part of a flight of four Frogfoot jets egressing the area of operation, when they were hit by anti-aircraft missiles. 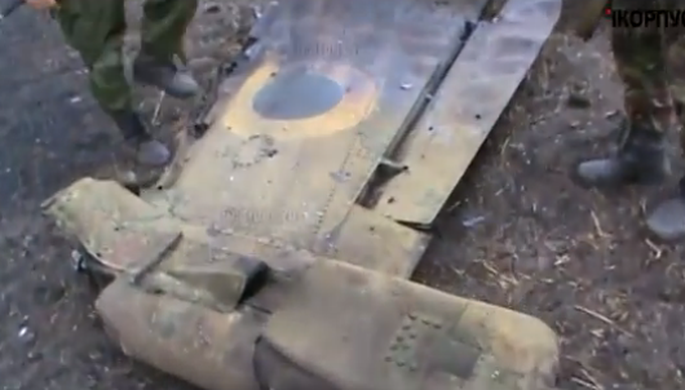 At the beginning of the footage you can see the flares deployed by one of the two aircraft, a sign that it was most probably targeted and downed by a MANPADS (Man Portable Air Defense System) rather than a SARH (Semi-Active Radar Homing) surface to air missile (as the Su-11 Gadfly “Buk”, believed to have downed the Malaysia Airlines Boeing 777 flying as MH17 from Amsterdam to Kuala Lumpur on Jul. 17).

[Video] Ukrainian Il-76 releases flares on take off from Donetsk

MANPADS (Man Portable Air Defense Systems) are a serious threat in Ukraine and elsewhere. Reportedly filmed near Donetsk, in eastern Ukraine, the following footage shows an Ukrainian Ilyushin Il-76 releasing plenty of flares during the […]

The following video, shows a Mil Mi-25 Hind gunship releasing flares during a mission over Talbiseh, Syria on Aug. 15. Flares are high-temperature heat sources ejected from the aircraft’s dispensers to mislead the missile’s heat-seeking […]