Ukrainian Air Force’s Gunships and Attack planes have been extensively involved in the offensive in Donetsk.

On May 26, Ukrainian Armed Forces launched a military operation to regain control over the international airport in the eastern city of Donetsk.

The operation saw the involvement of Mi-24 gunship helicopters and Mig-29 Fulcrum and Su-25 Frogfoot jets.

It all started early on Monday morning, when forces belonging to the self-proclaimed Donetsk People’s Republic (pro-Russia separatists) occupied the airport, in what appeared to be a show of force in response to Petro Poroshenko’s victory in the presidential election.

Airstrikes were launched after the self-defense forces failed to comply with the ultimatum put forward by Kiev’s troops to surrender by 1.00 PM local time.

While the gunships operated at low level, Mig-29, including one in the high-visibility, white, yellow and light blue livery of the one of the Ukrainian Falcons, the UkAF aerobatic display team, provided cover at higher altitude. 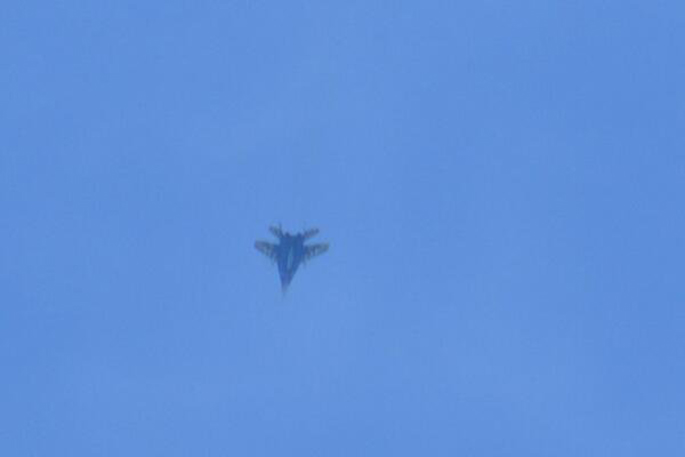 Actually, the first wave of air strikes did not only involve Mi-24s: the following video shows the Hind gunships supported by several Mi-8/17 Hip helicopters.

The airport was forced to suspend air traffic till 9.00 AM LT Tuesday May 27.

The “counter-terror operation” was backed by Sukhoi Su-25s. Two Frogfoot aircraft made a warning shot to the area of the separatists location, before the helicopters intervened.

Then, the Su-25s remained in the area throughout the rest of day and even performed an airstrike using rockets after dusk as the following video shows.

Note that the Su-25 involved in the rocket attack in the above video has navigational lights switched on: something quite unusual for a real operation, as they make the aircraft visible in the darkness from considerable distance.

Polish Air Force Jets Up Close and Personal. In June, in collaboration with the Polish General Command of Armed Forces, Foto Poork’s Filip Modrzejewski has been involved in an air-to-air photoshoot with the Polish Air […]

As website of the 32 Air Base of Polish Air Force reports, Raróg 2013 exercise ended two days ago. The large scale exercise of the Polish Air Force’s 2nd Tactical Aviation Wing was named after a Saker […]