The above information was already passed on by Bulgaria to the UN Register of Conventional Arms. Nonetheless it did only mention that 10 planes (some sources claimed only 6 were involved) were to be used as a spare-parts sources.

Bulgarian Su-25Ks were bought between 1985 and 1988 from the Soviet Union. They were used by Russians in Afghan and Ossetia theatres, as well as in Russia – Georgia conflict, back in 2008. Now 12 Su-25 are still serving in the Georgian AF. 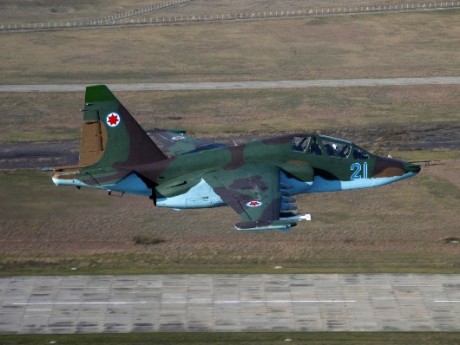 Still, there is some interesting material when it comes to the Su-25’s available in the web. The Youtube channel, kuslin2 features authentic video material from Sukhoi Su-25 operations in Chechnya. Mikhail Kuslin is the administrator of the channel, but most of the movies exist thanks to Mikhail Viktorovich Pavlov (Михаил Викторович Павлов)

Such profile would be nothing unusual when it comes to the career of a pilot in the Russian Air Force, nevertheless Pavlov has contributed to the movies that show the Su-25 activities in Chechnya.

The background story is that the clips are 8 h 15 minute long documentation of the 461 ShAP from the period of 1993 till 2007, including the Civil War in Tajikistan.

By coincidence, the pilots had access to a Panasonic M-3000 camera. It was not long that an idea to use it ‘in-flight’ emerged. As far as on the ground it was quite easy, in the air (taking into the consideration the fact that pilot wore ZSh-7 helmet, not the smallest one) it was quite a challenge.

In 1996, when Chechnya conflict was going on, an idea of creating aviation music clips emerged, using a simple VHS recorder. J.M. Jarre music was used for the clips.

Back in 1999 a friend of Pavlov got an idea that using a smaller portable Sony video camera would make it easier for the pilots to record the clips. The camera was mounted on the Su-25s sight in a way that did not obstruct its operationability.

Since some of the pilots got used to the camera being mounted like that, the clips from the 2nd Chechnya war were created, from the very pilot’s perspective, showing attacks with the use of S-24 and S-25 rockets, or the leading aircraft that launched flares in the dive.

You can watch most of the clips here.

Among the videos you’ll find this one, taken on Apr. 11, 1998 and showing a Su-25UB Russian Air Force crashed in Tajikistan during a demo (both crew members were killed).

The piece above would not exist had it not been for helpful insight provided by ‘John Cool’ from lotnictwo.net.pl discussion forum.