Evidence of shrapnel damage to the Malaysia Airlines flight MH17 has emerged from images taken at the crash site.

Photos taken at the MH17 crash site clearly show shrapnel signs on various parts of the wreckage of the Boeing 777 shot down over eastern Ukraine while en route from Amsterdam to Kuala Lumpur with 298 people on board.

Among all the images published on media outlets from all around the world, the one first published by Financial Times over the past weekend, struck our attention.

The piece of wreckage, reportedly measuring 1 mt sq, has a couple of distinctive features that may help the identification: the colored stripes of the Malaysia Airlines livery and the bolts of the cockpit side windshield.

Based on these details, with the help of our contributor Giuliano Ranieri, we identified (and obviously we were not the only ones) the piece as a chunk of front fuselage located next to the cockpit (slightly below it), on the left hand side of the plane.

The piece has several burn marks, a large central hole and several smaller punture marks surrouding it. The edges of the small holes seem to be bent outwards, evidence of something that got out of the skin from the inside of the plane.

This is a sign the missile, most probably fired by an SA-11 system according to almost all reports to date, equipped with a proximity fuse, detonated on the right side of the aircraft not too far from the nose, scattering several fragments of shrapnel so fast that they traversed the plane from side to side: they entered through the right side of the airframe and got out from the left one.

Furthermore, considering the amount of puncture marks concentrated at the base of the cockpit window’s we can assume both pilots were hit by high speed, hot shrapnels that most probably did not give them time to realize what was going on.

New, higher resolution images of the same part of wreckage have emerged. These images seem to point in a different direction.

Indeed, the holes have edges that appear to be inward. This could be coherent with a missile which did not blast on the aircraft’s right hand side, but on the left one, between the nose and the leading edge of the left wing. Still, the type of puncture marks and the concentration are suitable with a SARH. 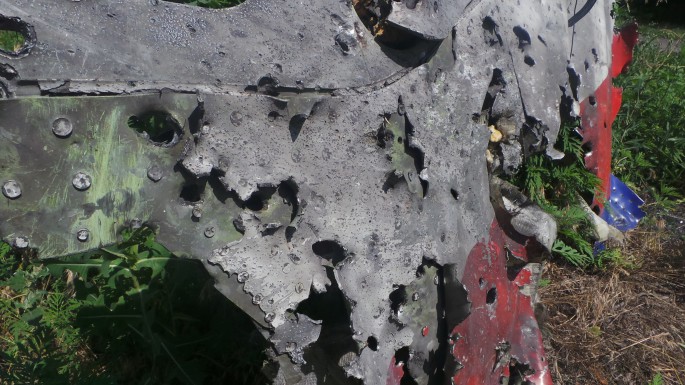 Ultra-low level maneuvering is one of the tactics needed to dodge IR-guided MANPADS (Man Portable Air Defense Systems). The video that you can find in this post has started doing the rounds in the last […]