The USAF plans to divest entire fleets, including the A-10 Thunderbolt II attack plane and U-2 Dragon Lady spyplanes and “focus on the multi-role aircraft that can deliver a variety of capabilities combatant commanders require”

The plan is going to axe some 500 aircraft across the inventories of all three components, reshaping the Air Force as “a smaller and more capable force […] that can defeat more technologically advanced adversaries” according to SecDef Chuck Hagel.

The reduction will affect squadrons based in 25 States and the District of Columbia; units based abroad will suffer minor cuts, in order to maintain a significant overseas presence. Nevertheless, Osan airbase in South Korea, will lose its A-10s, while RAF Lakenheath, in UK, will probably have to give away a whole squadron. 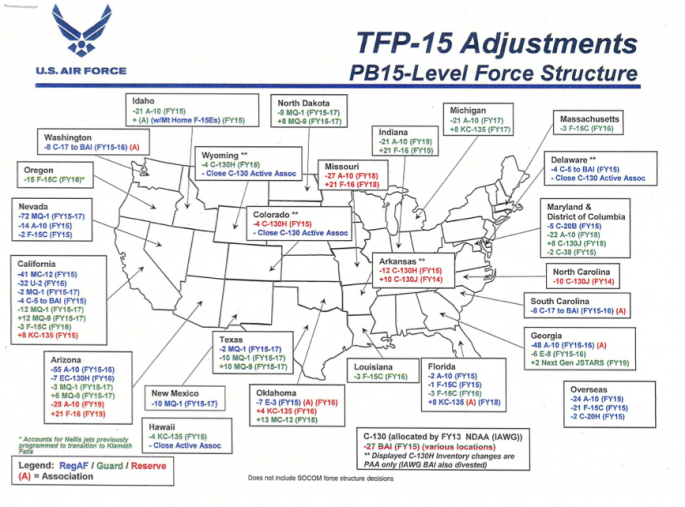 The operation will save the Air Force some billion dollars that will be used to fuel top spending projects/priorities: the F-35 multi-role stealth jet, the KC-46 tanker and the new long-range bomber.

“In addition to fleet divestment, we made the tough choice to reduce a number of tactical fighters, command and control, electronic attack and intra-theater airlift assets so we could rebalance the Air Force at a size that can be supported by expected funding levels.  Without those cuts, we will not be able to start recovering to required readiness levels,” said Air Force Chief of Staff Gen. Mark A. Welsh III in a press release.

Congress will probably alter the adjustment plan a little bit. Still, regardless of the money the lawmakers will commit to keep this or that plane and squadron alive, the U.S. Air Force will substantially shrink.

It will remain the most powerful aerial armada in the world, but not as large and powerful as it was years ago. Not a good thing, considered the opposite trends of the Chinese and Russian air arms.

[Photo] Inside a U.S. C-130H during a night air cargo drop over Afghanistan

An air cargo drop mission can be quite demanding, especially if conducted at night. The thing becomes much more challenging when the flight takes place over the enemy territory where there is a residual risk […]

The new nacelles will house the Rolls-Royce F130 engines selected with the B-52 Commercial Engine Replacement Program. Boeing released a video to announce the completion of the wind tunnel testing of the new engine nacelles […]