Authorities have confirmed that two names listed on the manifest of the missing Malaysian Airlines MH370 flight disappeared from radars 40 minutes from take off were stolen in Thailand.

On Mar. 8, Malaysia Airlines flight MH370, a Boeing B777-200 aircraft (registration 9M-MRO), operating from Kuala Lumpur and Beijing, disappeared from radars about 40 minutes after take off from Kuala Lumpur.

According to the details released by the airline, the flight was carrying a total number of 239 passengers and crew – comprising 227 passengers (including 2 infants), 12 crew members. The passengers were of 13 different nationalities.

The aircraft was regularly transmitting ADS-B data until contact was lost over the Gulf of Thailand, when the wide body cruising at 35,000 feet at 474 knots in reportedly good weather. The radar coverage in that area is good so as that of Flightradar24.com’s affiliated receiving stations. 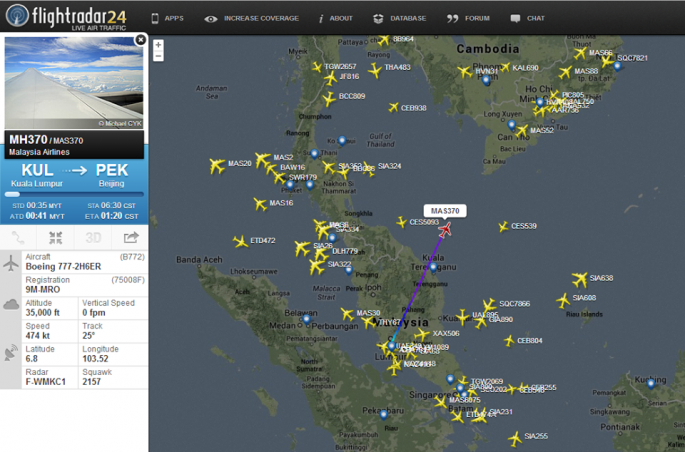 The crew did not broadcast any emergency radio call and the plane simply “vanished” as if a catastrophic failure did not give the pilots the time to inform the Air Traffic Control that they were going down, something that seems to rule out the possibility that MH370 experienced an engine problem or was hijacked.

As a large Search And Rescue operation is underway in the area the news that two used stolen passports were used to board MH370 is fueling speculations that the Boeing B777 may have exploded mid-air because of a bomb.

Indeed, based on the details currently available, an explosive decompression caused by an unknown factor (bomb, missile, airframe collapse, etc.) seems to be the most likely root cause of the crash.

Still, this is no more than speculation until further details surface but it may take days, or weeks to collect data and recover Flight Data Recorders.

FBI aircraft have been particularly active over San Bernardino, California, during and after the mass shooting. As already highlighted on Twitter, several assets, including FBI planes and media helicopters, could be tracked online on Dec. […]