The European Space Agency blog has an interesting story of a “close encounter” that took place over Russia on Nov. 11, 2013.

British Airways pilot Captain Simon Wijker was on board a Boeing 777 flying as BA015 from London to Singapore when, over Russia near Rostov (N42.22.7 E048.53.4, heading east) he spotted an object south of them that, in an email he sent to ESA described as “a white ball of fire travelling at very high speed following roughly the curvature of the Earth disappearing over the horizon to the North.”

Wijker was even able to take some pictures of the vapour trail left behind that he sent to the ESA.

The object that could be spotted from BA015 turned to be the Soyuz TMA-09M spacecraft, with ESA astronaut Luca Parmitano, NASA’s Karen Nyberg, Russian commander Fyodor Yurchikhin and the Olympic torch, shortly before it landed in Kazakhstan.

H/T to Roberto Petagna for the heads-up 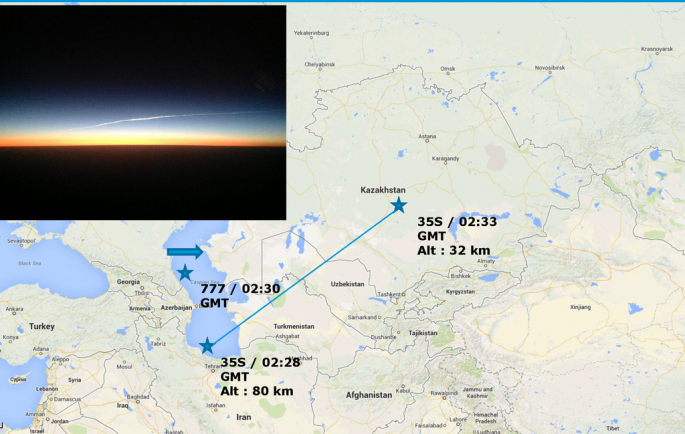 The second spacewalk by International Space Station astronauts Chris Cassidy, a former Navy Seal, and Luca Parmitano, an Italian Air Force test pilot, was aborted after 1 hour and 32 minutes on Jul. 16 after […]

In a blog post published on the ESA (European Space Agency) website, Luca Parmitano, the Italian astronaut who almost drowned last month when his hemet filled with water, provided more details about his terrifying experience […]