In a blog post published on the ESA (European Space Agency) website, Luca Parmitano, the Italian astronaut who almost drowned last month when his hemet filled with water, provided more details about his terrifying experience on his second spacewalk.

Here is an excerpt of his story.

At this exact moment, just as I’m thinking about how to uncoil the cable neatly (it is moving around like a thing possessed in the weightlessness), I ‘feel’ that something is wrong. The unexpected sensation of water at the back of my neck surprises me – and I’m in a place where I’d rather not be surprised. […] On the ground, Shane confirms they have received my message and he asks me to await instructions. […]
At first, we’re both convinced that it must be drinking water from my flask that has leaked out through the straw, or else it’s sweat. But I think the liquid is too cold to be sweat, and more importantly, I can feel it increasing. I can’t see any liquid coming out of the drinking water valve either. […]

As I move back along my route towards the airlock, I become more and more certain that the water is increasing. I feel it covering the sponge on my earphones and I wonder whether I’ll lose audio contact. The water has also almost completely covered the front of my visor, sticking to it and obscuring my vision. […] At that moment, as I turn ‘upside-down’ [to get over one of the antennae on his route], two things happen: the Sun sets, and my ability to see – already compromised by the water – completely vanishes, making my eyes useless; but worse than that, the water covers my nose – a really awful sensation that I make worse by my vain attempts to move the water by shaking my head. By now, the upper part of the helmet is full of water and I can’t even be sure that the next time I breathe I will fill my lungs with air and not liquid. To make matters worse, I realise that I can’t even understand which direction I should head in to get back to the airlock. I can’t see more than a few centimetres in front of me, not even enough to make out the handles we use to move around the Station.

[…] I’m alone. I frantically think of a plan. It’s vital that I get inside as quickly as possible. […] Then I remember my safety cable. […] It’s not much, but it’s the best idea I have: to follow the cable to the airlock. I force myself to stay calm and, patiently locating the handles by touch, I start to move, all the while thinking about how to eliminate the water if it were to reach my mouth. The only idea I can think of is to open the safety valve by my left ear: if I create controlled depressurisation, I should manage to let out some of the water, at least until it freezes through sublimation, which would stop the flow. But making a ‘hole’ in my spacesuit really would be a last resort.

I move for what seems like an eternity (but I know it’s just a few minutes). Finally, with a huge sense of relief, I peer through the curtain of water before my eyes and make out the thermal cover of the airlock: just a little further, and I’ll be safe. […] Moving with my eyes closed, I manage to get inside […] The water is now inside my ears and I’m completely cut off.

I try to move as little as possible to avoid moving the water inside my helmet. […] Now that we are repressurizing, I know that if the water does overwhelm me I can always open the helmet. I’ll probably lose consciousness, but in any case that would be better than drowning inside the helmet. […]

The minutes of repressurization crawl by and finally, with an unexpected wave of relief, I see the internal door open and the whole team assembled there ready to help. They pull me out and as quickly as possible, Karen unfastens my helmet and carefully lifts it over my head. Fyodor and Pavel immediately pass me a towel and I thank them without hearing their words because my ears and nose will still be full of water for a few minutes more.

Orbital DawnSpace is a harsh, inhospitable frontier and we are explorers, not colonisers. The skills of our engineers and the technology surrounding us make things appear simple when they are not, and perhaps we forget this sometimes.

Better not to forget. 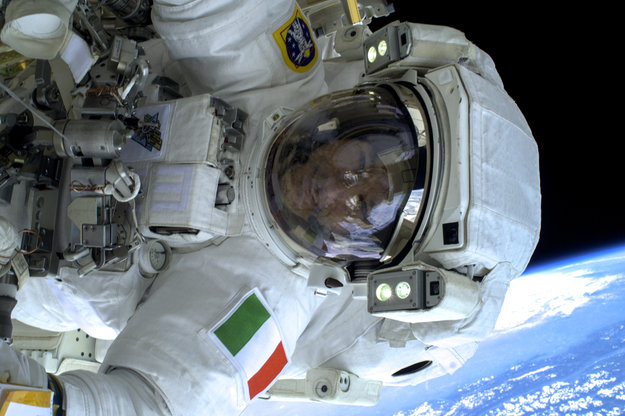 Luca Parmitano is a 36-year old Italian astronaut and Italian Air Force test pilot. He’s curently orbiting the Earth in the International Space Station. During his journey in the space, Parmitano, a flight engineer for […]

Could a satellite falling to Earth hit an airplane?

If you live below the red line in one of the two images below, please consider the 0,9% probability that one of the 26 pieces of debris (from 0,6 to 158 kg) from a satellite […]

From MARS-500 mission to COVID-19 restrictive measures: advices for facing quarantine and isolation. Diego Urbina is an engineer who took part in an experiment conducted on the ground to simulate conditions of human isolation that […]