Among the interesting photographs of the Earth he has taken from the ISS, Italian astronaut Luca Parmitano (the one whose helmet filled with fluid during a recent spacewalk) has recently uploaded on his Facebook page one image he titled “Space Invaders in the desert.” 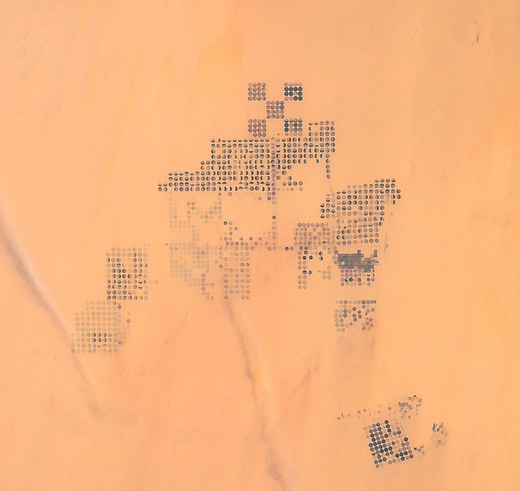 Indeed, the infrastructure depicted in the photograph, has something that reminds the late 1970s arcade games Space Invaders in which in which the player had to control a laser cannon moving horizontally across the bottom of the screen and fire at descending rows of aliens and their mystery ship.

We struggled to identify the site until we found someone on Parmitano’s Facebook page who pointed to this location (in a remote region of southern Egypt at the following coordinates 22.786311, 28.520508).

Even if there are various theories, some of those quite funny (as the one mentioning a GPS alignment site), the one photographed by the Italian Air Force test pilot and astronaut looks like a normal oilfield.

Update: according to a comment it is a large agricultural site. “The pattern is a result of a Central Pivot Irrigation system (equipment rotates around a pivot, creating a circular pattern in crops when viewed from above). You can find these all over the Middle East and are often associated with unseen underground water supplies.”

The European Space Agency blog has an interesting story of a “close encounter” that took place over Russia on Nov. 11, 2013. British Airways pilot Captain Simon Wijker was on board a Boeing 777 flying […]

Italian astronaut Luca Parmitano, who experienced a sort of Space Odyssey when his helmet filled with fluid during a recent spacewalk, has taken another interesting image from the International Space Station. After spotting a Central […]