Retired by the US Navy more than seven years ago, the iconic Grumman F-14 remains in service with the Islamic Republic of Iran Air Force (IRIAF). Iran extensively used its Tomcats in the Iran-Iraq War and the F-14A is still today the backbone of IRIAF air defense.

In the last years the “Persian cats” have reportedly flown against a very particular threat: the Unidentified Flying Objects, universally known as UFO.

More detailed information about this weird use of the last operational Tomcats can be find in the October 2013 issue of Combat Aircraft.

An interesting article written by Babak Taghvaee gives an exclusive overview of IRIAF F-14s missions conducted to intercept UFOs. But according to Taghavee these unknown flying objects didn’t conduct any extraterrestrial activity: “When Iran’s suspicious nuclear program was revealed to the public, Western nations, led by US and Israel, warned it to abandon its nuclear activities. The US attempted to gather information concerning the activities at three important Iranian nuclear facilities: the reactor of Bushehr, an additional reactor in Arak and the fuel enrichment plant at Natanz. A number of reconnaissance UAVs were sent to collect intelligence to help prepare for a possible attack.”

To intercept UAV (Unmanned Aerial Vehicles), IRIAF F-4Es and F-14As, based to Bushehr to serve as QRA (Quick Reaction Alert) interceptors, were scrambled several times. But the American drones have astonishing flight characteristics: “Including an ability to fly outside the atmosphere, attain a maximum cruise speed of Mach 10, and a minimum speed of zero, with the ability to hover over the target” as explained by Taghavee. These performances along with their powerful ECM make the F-14s unable to operate their weapons.

But, according to Taghavee, at least one time a Tomcat was able to come very close to an engagement with one of these “UFOs”: “In one case over Arak in November 2004, the crew of an F-14A armed with two AIM-9Js and two AIM-7E-4s spotted a luminous object flying near the heavy water plant of the Arak site. When the beam of the jet’s AN/AWG-9 radar painted the object, both the RIO and pilot saw that the radar scope was disrupted, probably due to the high magnetic energy of the object increasing the power of the reflected radar waves. The pilot described the object as being spherical, with something like a green afterburner creating a considerable amount of turbulence behind it. The Tomcat crew achieved a lock-on when it was flying a linear and constant flight path. Once the pilot selected an AIM-7E-4 to launch against it, the object increased its speed and then disappeared like a meteor.” 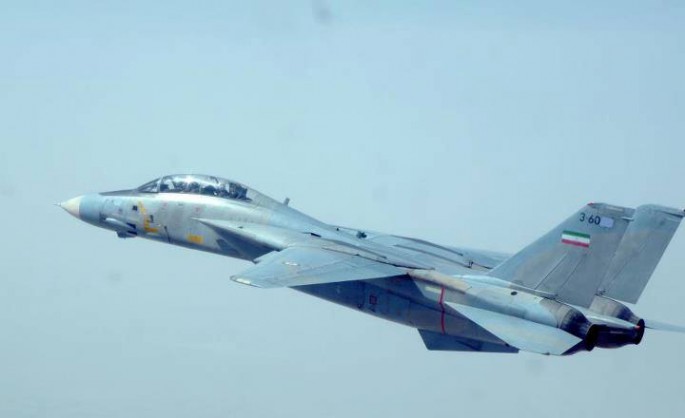 This kind of flight were suspended after several attempts to intercept the US UAVs were made by F-4Es and F-14A over the Bushehr, Arak and Natanz plants, but, as reported in the article, another mission was launched around the 04.20hrs on January 26, 2012, when “an Iranian Air Defense Command radar site near Bushehr identified an unknown aircraft flying towards the area. An F-14A was ordered to scramble. At 04.30hrs it took off from TFB.6, ( 6th Tactical Fighter Base, placed near Bushehr) but seconds later the fighter exploded, killing both crew instantly. The reason for the incident remains a mystery, and the aircraft involved was one of the fittest IRIAF Tomcats, with the lowest flying hours in the fleet.”

This Tomcat was the serial 3-6062, the one which could have been shot down by the “Revolutionary Guards” air defense as explained recently by The Aviationist. So if this was the cause of the “incident” (several sources believe the F-14 was not shot down by “friendly fire”), it becomes clear that there wasn’t any UFO involved in this mishap and it remains unexplained only the nature of the drones involved in the intelligence activity over Iranian nuclear plants.

We can affirm that while many times in the last years several UAVs flew over Iran to gather information (such as the stealthy RQ-170 captured in December 2011), a drone with flight characteristics like those described by Taghvaee is still unkown, unless we assume the SR-72, a replacement of the SR-71, or something similar, is already covertly flying.

But again, Taghvaee has no doubts about the nature of these unidentified flying objects, since in his article he says that “After two years of research on the objects flight profiles and examination of remnants of a crashed example recovered in 2006 (in both Iran and then by experts in Russia), the Iranian Army specified that they were US intelligence drones.”

Sea, Air and Space: Iran is quite active these days. Local media have been reporting that Tehran has launched a new satellite on Feb. 5, to celebrate the 33rd anniversary of the 1979 Islamic Revolution […]