On Aug. 7, 2013, a Delta Airlines A.330-300, flying as DAL099 from Paris Charles De Gaulle to Detroit diverted to Amsterdam after experiencing an inflight problem.

The civil plane, N814NW had problems with flap extension/retraction so it circled over Norwich, UK, at FL250, to burn fuel and wait until Amsterdam was able to accept it for landing.

So far so good.

The aircraft eventually landed at Schipol airport and everyone safely disembarked the Airbus. 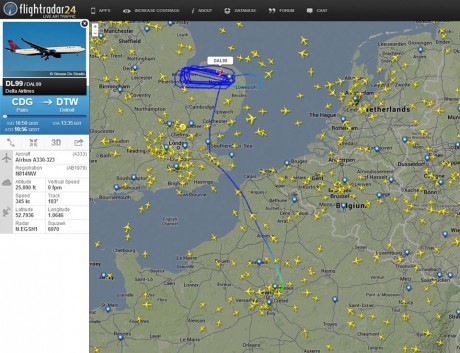 However, something weird happened as the Airbus burned off fuel to reduce its weight over southeast England: as airband monitors and aircraft enthusiasts noticed, the emergency sparked an unusual type of reaction by the British Air Traffic Control (ATC) agencies.

Indeed, Delta 099, that was already in positive radio and radar contact with the civil ATC, not only switched to a London Military ATC control frequency, but did also squawk a London Mil transponder code: in other words, it was momentarily handed over to a military ATC agency.

Usually, flights in trouble are usually kept on the same frequencies as long as possible (that is to say that radio frequency changes are reduced to the minimum – something that applies to most serious emergencies) but in this case the Airbus 330 changed both VHF frequency and transponder code to be managed by the military radar.

That said there are several reasons why this may have happened. Among them there is the possibility that the emergency wasn’t so serious and the aircraft was directed to circle in zone where other military traffic was operating; therefore it was switched to London Mil to reduce the coordination effort required by the civilian ATC to manage a plane in proximity with operative air traffic.

In fact a French Air Force E-3 “flying radar station” was reported circling in the same area (most probably a coincidence) and the controllers decided that it was better to have both the Delta and the French AWACS on the same frequency for proper deconfliction.

However, according to some readers there are speculations according to which the Delta 099 carried a U.S. VIP being repatriated following the US Embassies terrorist threat.

We are unable to verify the thruthfulness of such rumors, still we can’t completely rule out that the presence of a U.S. diplomat aboard and/or some kind of terrorist scare influenced the way the emergency was managed.

What do you think?

The older Mirage will be replaced by the Rafale, while the Mirage 2000D and 2000-5F will remain in service. The Armée de l’Air et de l’Espace bid its farewell to the last Mirage 2000C in […]