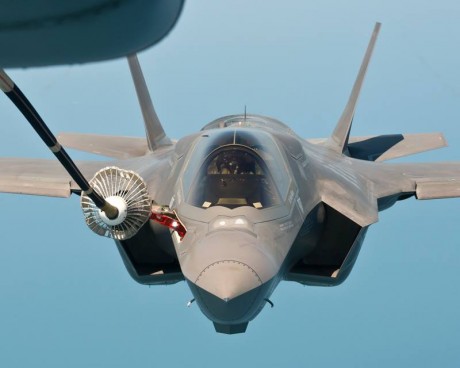 So far, the majority of the images of the F-35 being refueled came from the typical point of view of the KC-135 boom operator.

This image was taken by a KC-10 equipped with a hose (in place of the flying boom) hence the interesting perspective on the stealth plane.

C5 Landing Nose Gear Up at Edwards AFB’s Dry Lakebed Few days ago we posted the fascinating video of a B-1 bomber performing a nose gear up landing at Rogers Dry Lakebed, Edwards Air Force […]

This is the reason why F-117 stealth jets are still flying. Maybe…

F-117 Mysterious Flights. Is the Riddle Solved? Maybe or maybe not. Last month we published some photographs, shot around Tonopah Test Range, that proved that one or more F-117 Nighthawk stealth jets are still flying […]