About 150 men and 6 F-16 Viper fighter jets are going to be flying over the Polish territory for the next two weeks. The supporting C-17 transport planes and the ground crews have already arrived on Thursday, while the F-16’s are going to arrive in 32. AFB in Łask today (May 11, 2013).

As the Polish Air Force Commander, General Majewski, said, the planes from the Air National Guard 176th Tactical Fighter Squadron originating from Truax AFB in Wisconsin are going to train integration and interoperability with the Polish Jastrząb (Polish name for the F-16) planes. Additionaly the exercise will involve Su-22‘s from 21 AFB in Świdwin and MiG-29‘s from 23 AFB in Minsk Mazowiecki. 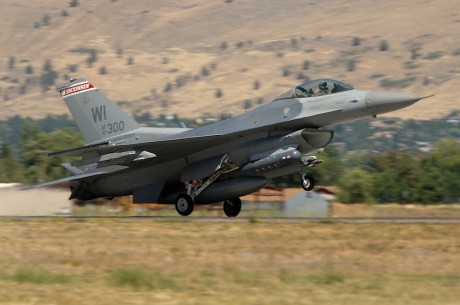 The aim of the exercise is to facilitate integration of pilots, ground and logistics crews. What’s more, the exercise also aims at improving the English linguistic proficiency of the Polish aviators.

On May 17, the American aviators are to be visited by the US Ambassador in Poland, Stephen Mull and by general Majewski.

Integration between PAF and USAF has already begun: a regular rotation of USAF detatchments in Poland has started this year (with Nellis AFB detatchment in Łask being the first one).

Poland is about to support the air policing mission over the Baltic States. The Polish Air Force is to commit some of its F-16 jets to the NATO BAP (Baltic Air Policing) operation beginning in […]

The Baltic Bees Jet Team is an aerobatic team which took part in several events in Poland this year. Here are some amazing air-to-air shots of the team, taken in connection with the Poznan Aerofestival. […]