Here are two videos showing a transfer and operations of Polish MiG-29’s during the Baltic Air Policing mission which is a NATO initiative of conducting air monitoring of the Baltic region.

I suppose this gives us quite realistic view on how it feels to be in Fulcrum’s cockpit over the Mid-Eastern Europe. The unmodified sound in the video makes it even more close to the real flight, allowing us to hear the engines working.

Note that the MiG-29s in the video are armed with four R-60 (AA-8 Aphid) air-to-air short range missiles and carry an external fuel tank.

The second video gives an even closer impression of flying, as the camera is mounted on the pilot’s helmet. 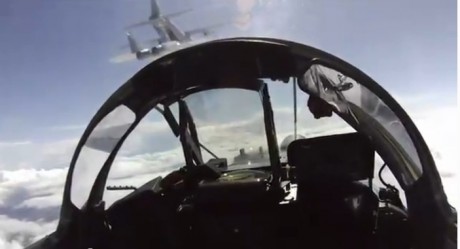 We can see some of the combat operations and what is more – probably the photoshoot mentioned in one of the earlier posts! (note the open cargo door of the C-27 Spartan airplane featured in the clip)

Radom Air Show 2018 report. Last week, on Aug. 25. and 26., the Polish Air Force celebrated its 100th Anniversary, during a special Centenary edition of the Radom Air Show. Even though the occasion was […]

As we have already reported, the Belarusian Air Force has withdrwan from use its Su-27 Flanker fleet. Nonetheless it still operates several MiG-29 Fulcrums. The news is that these aircraft are to be modernized by […]

Air-to-Air With The RAF Typhoons Guarding the Baltic Skies

Here’s what it looks like to be intercepted by RAF Typhoons deployed to Estonia for NATO Baltic Air Policing. Last week our fellow photographer, Michał Prokurat, had an opportunity to participate in a COMLOSS sortie […]