The Lockheed Martin F-16 Fighting Falcon is the western world’s most prolific fighter of the last 40 years.

Even though medium and long range air-to-air missiles, such as the AIM-7 Sparrow and the AIM-120 AMRAAM,  have been integrated in the F-16 since 1986 for the BVR (Beyond Visual Range) engagements, the Viper was born in response to LWF (Light Weight Fighter) program, for a small and agile fighter: the USAF needed a small, cheap, maneuverable jet to complement the F-15 Eagle, its air superiority fighter, and face the small Soviet fighters, such as the MiG-21, in close air combat.

Therefore, understanding which are the advantages and the disadvantages of F-16 against the modern western fighters in DACT sessions, based on pilots accounts and most widely known fighter jets characteristics (Rules of Engagement within the training scenario, pilots skills and other factors which may have a significant impact on the outcome of a dogfight will be ignored), can be interesting. 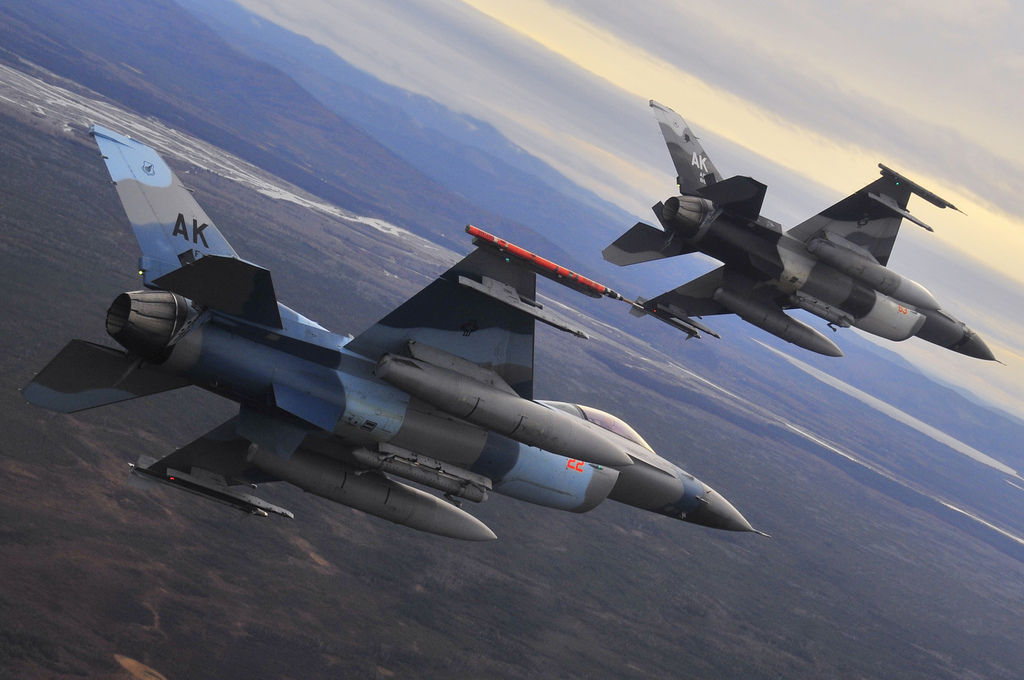 According to one of the more experienced of the U. S. Air Force Viper’s pilots, Lieutenant Colonel Philipe “Rico” Malebranche, the F-16 can do very well against the F-15. The F-16 is small, light and agile: although it has a lower maximum speed and rate of climb, it has a smaller Radar Cross Section and, once on the merge, it’s hard to spot. Furthermore, its turn rate is impressive: it does not lose much energy in turns (unlike, for instance, a Mirage 2000) and can outmaneuver the F-15 in low altitude dogfights.

However, the toughest of the fighter jet to face in aerial combat, at least if you are seated in an F-16, is the F-22 Raptor: “It’s not a matter of trying to kill him, but to see how long you can survive!” as “Rico” says in “Viper Force: 56th Fighter Wing–To Fly and Fight the F-16” book by Lt. Col. Robert “Cricket” Renner USAF (Ret.).

WVR engagements versus the F/A-18E/F Super Hornet can be quite challenging as well.

The F-16 has a higher thrust-to-weight ratio than the “Super Bug” and this is an advantage Viper drivers can exploit in close air combat: “we can climb 3,000 feet above the F-18, then bunt over to put him in the HUD (Head Up Display) for a gun shot” Malebranche, who has also been an exchange pilot in a U.S. Navy Hornet Squadron, says.

However, while it bleeds energy faster than the F-16, the “Rhino” is much better than the Viper if the dogfight gets slow, because the Hornet handle high angles of attack and point the nose at the opponent easier.

And how can the Viper perform against the Eurofighter Typhoon?

During more or less  a decade of service with the Italian Air Force, the F-16 has been extensively used to train Typhoon pilots in WVR engagements. According to the Italian pilots, the F-16 matches the F-2000 under 10,000 feet. But above FL100 the Typhoon becomes quite difficult to beat since its superior aerodynamics give the Euro-canard the ability to outmaneuver the Viper in almost every engagement.

The following pictures were taken by Giovanni Maduli on Feb. 13 at Pratica di Mare. Interestingly, the G.222 MM62146 is still flying a lot for the locally-based 14° Stormo. About David CenciottiWebsiteFacebookTwitterLinkedIn instagramDavid Cenciotti is […]

The Italian Air Force Chief of Staff recently talked about the FVL and Tempest/FCAS as the service’s two most important projects. Talking to the media on July 19, 2022, during the “Tende Scaglia” special operations […]