U.S. Navy F/A-18 Hornets released a swarm of 103 Perdix semi-autonomous drones in flight. Welcome to the future of war tech.

The U.S. Department of Defense has revealed in a press release dated Jan. 9, 2017 that three U.S. Navy F/A-18 Hornet two-seat variants have successfully released a “swarm” of 103 Perdix semi-autonomous drones in flight. The tests were carried out at China Lake range, on Oct. 25, 2016, and were administered by the Department of Defense, the Strategic Capabilities Office, partnering with Naval Air Systems Command.

The miniature Perdex drones, different from larger, more common remotely piloted vehicles (RPVs) like the well-known Reaper and Predator, operate with a high degree of collective autonomy and reduced dependency on remote flight crews to control them. The large group of more autonomous Perdex drones creates a “swarm” of miniature drones. The swarm shares information across data links during operation, and can make mission-adaptive decisions faster than RPV’s controlled in the more conventional manner.

In a statement released by the U.S. Department of Defense, Strategic Capabilities Office Director William Roper said, “Due to the complex nature of combat, Perdix are not pre-programmed synchronized individuals, they are a collective organism, sharing one distributed brain for decision-making and adapting to each other like swarms in nature,” Director Roper went on to say, “Because every Perdix communicates and collaborates with every other Perdix, the swarm has no leader and can gracefully adapt to drones entering or exiting the team.”

As said, the initial flight release tests were conducted in October 2016 at the China Lake NAVAIR Naval Air Warfare Center Weapons Division (NAWCWD). Based on released footage they were likely flown by two-seat F/A-18Ds of VX-30 the Navy’s Air Test and Evaluation Squadron Nine known as “The Bloodhounds”.

The Perdex drone swarm was released in flight from three F/A-18D’s dispensing the swarm from two underwing pylons. 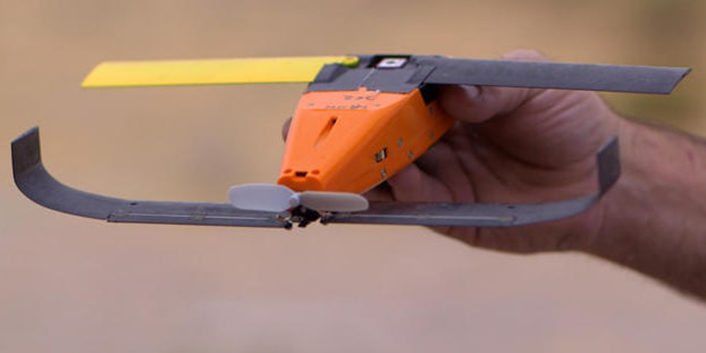 The drones are named “Perdex” from Greek mythology after a human student who morphed into a small bird for survival. They are only 6.5 inches long with an 11.8 inch wingspan. Perdex is propeller driven from a small 2.6 inch propeller in a rear-mounted “pusher” configuration. The miniature robot aircraft has extremely short endurance, with only 20 minutes of flight possible in current versions.