In an uncharacteristic media release by the U.S. Air Force, U.S. EC-130H Compass Call electronic warfare aircraft have been reported as active in support of anti-ISIL operations in Iraq.

The EC-130H Compass Call is a modified version of the versatile C-130 platform that was conceived as a transport but has been modified for missions such as search and rescue, gunship and even bomber. The EC-130H version conducts various types of signals surveillance, interdiction and disruption along with additional undisclosed capabilities that may include surveillance and jamming of cellular and other wireless signals.

In an official release published on the U.S. Air Force official website, Lt. Col. Josh Koslov, squadron commander of the 43rd Expeditionary Electronic Attack Squadron, is quoted as saying, “When the Compass Call is up on station supporting our Iraqi allies we are denying ISIL’s ability to command and control their forces.” Koslov emphasized, “If you can’t talk, you can’t fight.”

Published specifications for the EC-130H say the aircraft employs a 13-14 person crew. In the release published by the U.S. Air Force there is mention of linguists on board to “Help us efficiently find, prioritize and target ISIL.” Sources are also quoted as saying onboard linguists “help the electronic warfare officer make jamming decisions in order to provide the effects desired by the ground force commander.”

ISIL insurgent forces rely heavily on cell phones for communication, including the command detonation of improvised explosive devices. According to an article published in January by Fightersweep.com, “The EC-130H can detect all of these, and jam them selectively. ISIL has similar preferences in communications gear and in the midst of combat they have found, like the Taliban, there is no solution to the problems created by a EC-130H overhead.”

Since the EC-130H’s role in combating Daesh through signals intelligence and interdiction is largely non-attributable and non-lethal area commanders can use it with impunity. There is no risk of collateral damage as with bombs and missiles that directly destroy targets.

In October, a top-ranking U.S. Air Force official announced that a small enemy drone controlled by ISIS had been downed by an Electronic Attack aircraft asset: although no specific type was mentioned, few USAF platforms other than the Compass Call are known to have the ability to use Electronic Warfare to disrupt the signal between the UAV and its control station.

The EC-130H’s numbers were briefly threatened prior to 2016 according to a report in the Arizona Daily Independent, a newspaper published near the EC-130H’s home base at Davis-Monthan AFB in Tucson, Arizona. The report cited “a proposal to retire seven EC-130H Compass Call electronic attack fleet airplanes stationed at Davis-Monthan Air Force Base in Tucson.” According to the ADI news report, the National Defense Authorization Act for Fiscal Year 2016 prevented the retirement of these aircraft citing the critical importance of their mission to “protect our air men and women from sophisticated electronic attacks in conflicts across the Middle East such as Libya, Iraq and Afghanistan as well as against potential threats in the Pacific and Europe.”

Few specifics of the EC-130H’s mission are available publicly. It is probable the EC-130H operates partially in support of classified U.S. special operations teams in the region, and that these teams accompany Iraqi forces in the anti-ISIL campaign. These teams’ additional roles likely include targeting for U.S. and coalition airstrikes.

The EC-130H is probably teaming up with the RC-135 Rivet Joint and other EA assets operating over Iraq and Syria to deny the Islamic State the ability to communicate.

The release of information about EC-130H operations by the Air Force, however vague it may be, is significant since the EC-130 overall force is so small, consisting of only 14 aircraft according to the Air Force. Additionally, because of its classified mission and capabilities, little is seen in the media about the EC-130H role, making this information release about the aircraft noteworthy. 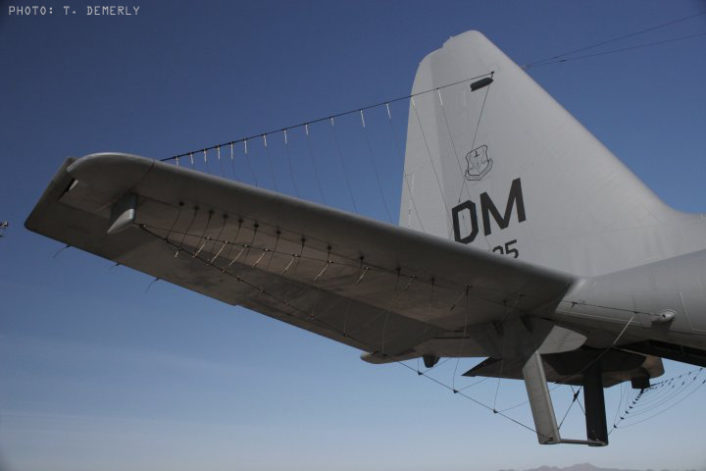 We Visited “Jedi Transition” to Learn If the Best Low-Flying Area in the U.S. Is in Danger. It is the African big game safari, the Mt. Everest and the Louvre of plane spotting: the “Jedi […]

Some F-117s have already taken the road to the scrapyard, others continue flying. Enjoy your Black Friday with a Black Jet story. As already reported, an F-117 Nighthawk was spotted on a trailer on US-95, […]