“A throttle trigger malfunction and inadvertent throttle rotation resulted in an F-16CM being destroyed upon impacting the ground south of Peterson Air Force Base, Colorado”

On Jun. 2, 2016, a U.S. Air Force Thunderbirds F-16 crashed shortly after the demo team had performed a flyover at the annual Air Force graduation ceremony in Colorado Springs, attended by President Barack Obama.

The pilot managed to eject before the aircraft crash landed in a field not far from Peterson AFB, Colorado.

On Dec. 14, the U.S. Air Force Air Combat Command released the Accident Investigation Board report about the incident according to which the F-16CM #6 crashed as a result of “a throttle trigger malfunction and inadvertent throttle rotation.”

Here’s a relevant excerpt from the report:

So, the pilot placed the throttle to the cut-off position instead of Idle because the trigger that would normally prevent it to reach that position was stuck in the pressed position. 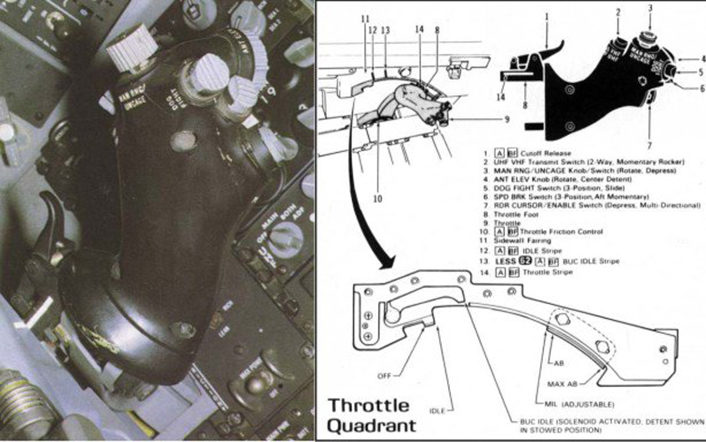 The following video (H/T to our friends at Fromtheskies blog) clearly shows how the f-16’s throttle works.

Here below another video that shows how the throttle moves from Idle to the cut-off position using the trigger:

“Once the engine cut-off occurred, the aircraft immediately lost thrust. The pilot attempted engine restart procedures, but restart was impossible at the low altitude of the aircraft. The pilot safely delayed his ejection until he navigated the aircraft to a grass field.”

“The aircraft, valued at approximately $29 million, was destroyed. There was no known damage to civilian property. At the time of the accident, the pilot was a current and qualified air demonstration pilot, with more than 1,200 hours flying the F-16 and a total flight time of 1,447 hours. He resumed demonstrations with the team.”

Four Hellenic Air Force Vipers made a fuel stop in Italy on their way to Poznan, Poland. NATO Tiger Meet is an annual exercise that gathers squadrons sporting Tiger (or feline) emblems. The Exercise’s distinctive […]

The new Multi-Domain exercise follows the lead of the last summer’s drills, while continuing to increase the presence of the United States in the Black Sea region. The U.S. Air Forces in Europe and Air […]