During the last flight, the unmanned Phantom served as an aerial target and was shot at by an F-35 with two AIM-120s. Nevertheless, the aircraft landed safely back home.

The U.S. Air Force has just released some information about the QF-4 drone‘s last flight along with a video and some photographs. Interestingly, the aircraft that have flown as unmanned aerial targets for several DoD and foreign military sales customers testing next generation weapons, flew its last sortie supporting an F-35 mission on Aug. 17. 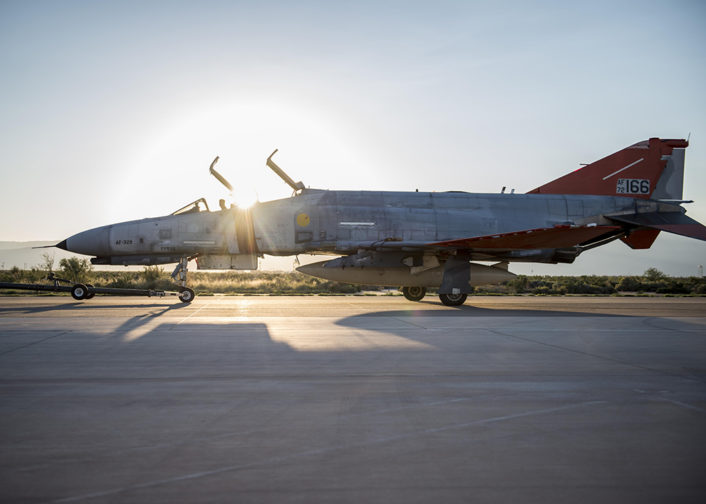 According to Lt. Col. Ronald King, the 82nd Aerial Targets Squadron, Detachment 1 commander, the aircraft was shot at by the F-35 Lightning II with two AIM-120 AMRAAMs (advanced medium range air-to-air missiles). We don’t know the exact scope of the weapon test, the RoE (Rules Of Enagement), the scenario and whether the QF-4 was expected to escape the downing. Maybe something went wrong, the missile launch failed or was cancelled, or just missed (because no missile has a probability of kill of 100 percent). However, it’s at least worth of note that the unmanned Phantom landed back at Holloman Air Force Base completely unharmed in spite of being targeted by the (controversial) 5th generation fighter and shot at with 2 radar-guided air-to-air missiles.

The reason for the QF-4 not being shot down is probably that the test was not a test of the AIM-120 missile’s ability to hit a target (something that has been proved in the past) but on the F-35’s ability to track the target and guide the AMRAAM until this reached the kill envelope. Once the missile starts self-guiding to the drone the test is accomplished and there is no need to waste a costy unmanned aircraft: the AIM-120 is directed to self-destruct before impact.

However some readers point out that previous tests saw some controversial “misses” (“the drone was beyond visual range and the AIM-120C was directed as planned to self-destruct before impact”) whereas other tests (for instance those with the AIM-9X) involving QF-4s or even more expensive QF-16s eventually led to knocking down the drone with direct hits (“After launch, the missile successfully acquired the target and followed an intercept flight profile before destroying the drone, achieving the first F-35 Air-to-Air kill or “Boola Boola,” which is the traditional radio call made when a pilot shoots down a drone.”)

Will keep you updated if more details emerge and the expected outcome of the mission is clarified.

Anyway, the unmanned mission on Aug. 17 served as the final unmanned flight before the QF-4 program ends in December year, and the 82nd ATRS, Det. 1 transitions to flying QF-16s. Until then, the unit will fly the Vietnam era F-4 as a manned aircraft.

Holloman Air Force Base, N.M. is the only base with a QF-4 mission. However, the 82nd ATRS, based out of Tyndall AFB, Florida, has been flying QF-16s since September 2014.

“It’s certainly bittersweet,” said King in a USAF release. “The F-4 served faithfully in Vietnam and as late as the Gulf War. So, for it to be pulled out of the boneyard to continue serving its country is a testament to this airplane — to the designers, the test pilots who first flew it, to the maintainers who’ve worked on it all these years — what a testament to what they’ve been able to do, and what a great airplane it was. Forty-five years later, we are still flying these airplanes to test the latest and greatest equipment we have.”

On Feb. 16, 2012, an F-35A aircraft from Edwards AFB, California, flew for the first time with external weapons. Although no weapons were delivered during the sortie, the payload of the Joint Strike Fighter’s Conventional […]