Axalp Ebenfluh is a famous firing range located near Meiringen air base.

From 1942, once a year, the Swiss Air Force (Schweizer Luftwaffe) opens the range to the public during the firing activities carried out by the Swiss combat planes: formations of F-5E Tiger and F/A-18 Hornet jets engage the range for the practice shooting sessions in front of photographers from all around the world.

The two photos in this post (that some of you may have already seen) were taken by Polish photographer Andrzej Rogucki at the Axalp range in Switzerland during one of such sessions in 2012. They show Swiss Tigers firing the two M39A2 cannon, 20 mm caliber single-barreled revolver cannon originally developed for the U.S. Air Force in the late 1940s (!), one on either side of the F-5’s nose.

What is really cool about these shots is that Rogucki was able to catch the bullets fired by the F-5E and the conical shockwaves generated by the bullets travelling at supersonic speed (1/3200s shutter speed at 1000mm). 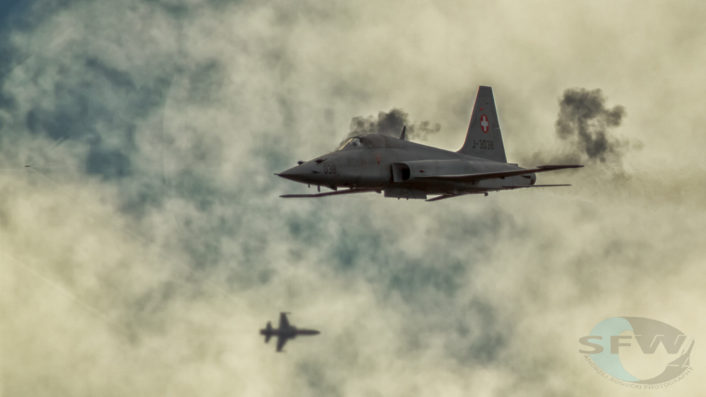 It’s Official Now: Switzerland Has Chosen The F-35 As The Next Swiss Air Force Fighter

The Swiss Federal Council announced Lockheed Martin’s F-35 Lightning II is the aircraft selected from its New Fighter Aircraft competition. It won against the Dassault Rafale, Eurofighter Typhoon and the Boeing Super Hornet. As some […]

Take a look at how the Super Hornet’s flight control surfaces move during approach. Earlier this month, our friend Ben Ramsay (UK Aviation Movies) visited Meiringen Air Base, in Switzerland, during the Super Hornet demonstration […]