The Italian F-2000s have conducted 115 missions logging 180 flying hours in the Nevada Test and Training Range.

Among the more than 70 combat planes that took part in the exercise at Nellis Air Force Base, there were, for the first time ever, also 8 Eurofighter Typhoons of the Aeronautica Militare (Italian Air Force).

The F-2000s (as the aircraft are designated in Italy), belonging to the 4° Stormo, based at Grosseto, and 36° Stormo (Wing) based at Gioia del Colle – even though personnel taking part in the mission was from all the units flying the Typhoon, including the 37° Stormo, based at Trapani, had left Italy on Feb. 19, accompanied by two KC-767A tankers with the 14° Stormo from Pratica di Mare, and three C-130J Super Hercules with the 46^ Brigata Aerea (Air Brigade) from Pisa.

The Italians mainly focused in the air-to-air role taking part to the RF sorties with a typical configuration that saw the pilots wear the Helmet Mounted Symbology System (HMSS) and the aircraft carry the double 750 kilograms wing tanks and one Airborne Instrumentation Subsystem (AIS) pod used for ACMI (Air Combat Maneuvering Instrumentation) activities. 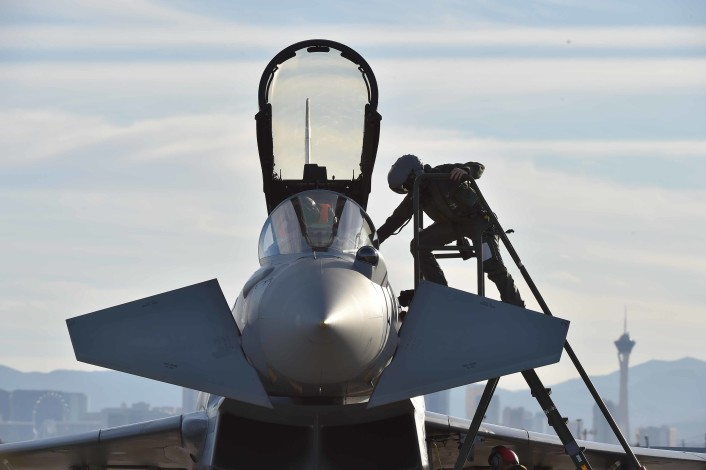 In the air-superiority mission, the Italians enjoyed the opportunity to train in a scenario made particularly deadly by the presence of F-15, F-16, AT-38 and A-4 playing the Aggressors role as part of “best Red Air in the world,” as well as some cutting edge anti-aircraft warfare. 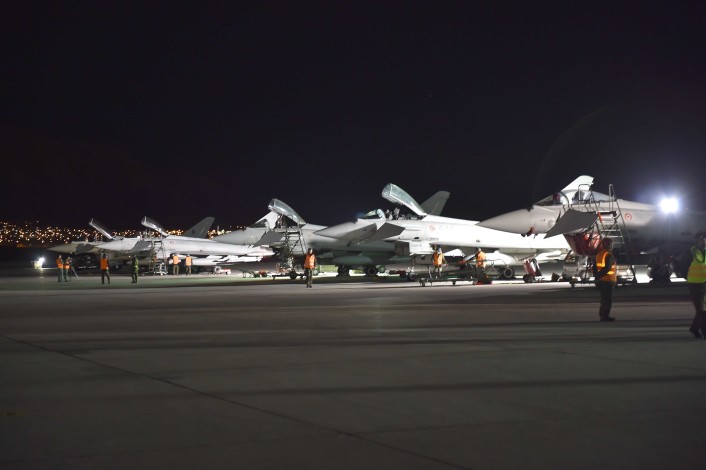 Furthermore, the complex scenario foreseen by the Red Flag exercise provided an opportunity to further develop the swing-role capability of the aircraft: three of the Typhoons deployed at Nellis AFB were Tranche 2 examples that embedded the P1E(B) upgrades and were loaded with the latest SRP (Software Release Package). 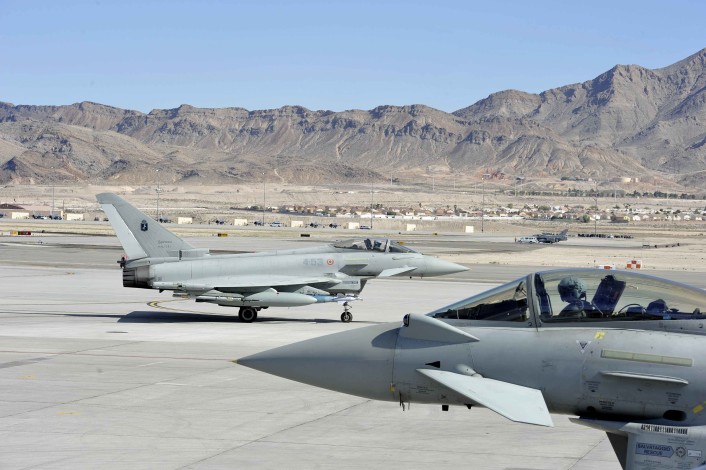 However, as explained by the Italian detachment commander Col. Marco Bertoli, the Italian Air Force does not plan to employ the Typhoon is the air-to-surface role but in particular scenarios: the swing role is being primarily developed to support the platform’s export capabilities and help the industry promoting the aircraft in particular regions (like Kuwait).

This is the very first participation of the ItAF Typhoon fleet to the Red Flag exercise, even though the aircraft have taken part in real combat operations in Libya and have undertaken air defense duties in Iceland and the Baltic States.

The Italian F-35 jets deployed to Estonia, scored their first intercept under NATO command in the Baltic region. On May 14, 2021, the Italian Air Force F-35 aircraft deployed to Ämari Air Base, Estonia, to […]