Scud Hunt was one of the main tasks for RAF Tornado aircrews during the First Gulf War.

Born in response to Great Britain, Germany and Italy’s requirement for an advanced attack aircraft capable to fly at ultra-low altitude, the MRCA (Multi Role Combat Aircraft) program led to the birth of one of Europe’s most important combat planes: the Panavia Tornado.

The “Tonka” (as the Tornado was later dubbed) was developed in three main variants: the IDS (Interdiction and Strike) fighter bomber, the ECR (Electronic Combat and Reconnaissance) specialized in SEAD role, and the ADV (Air Defense Variant) fighter.

The first large deployment of Tonkas was in 1991 during Operation Desert Storm (named Operation Granby by the Royal Air Force) in Iraq, where RAF brought also some examples of Tornado GR.Mk 1A, the reconnaissance version of the European multirole aircraft. The latter represented a new generation in data acquisition platforms, since it recorded its pictorial information on videotape instead of traditional film.

Since this “recce” variant had only recently entered service and was experiencing several problems with the quality of its imagery, six GR.Mk 1As from Nos II and 13 Squadrons were only able to arrive at Dhahran, Saudi Arabia, between Jan. 14 and 16, 1991, hours before the beginning of the war.

But this late deployment didn’t prevent a worthwhile use of the Tornado GR.Mk 1A: in fact, the first three missions performed by the reconnaissance version of the Tonka were all “Scud hunts”, conducted against the mobile missile launchers which were attacking Saudi Arabia and threatening Israel. In this kind of mission, the GR.Mk 1A proved to be an invaluable asset, thanks to the so-called “Tornado Reconnaissance System” which consisted of a near real-time observable infra-red line scan mounted beneath the fuselage.

Since the line scan could operate at night without need of photo flashes, all Desert Storm missions were flown after the sunset. The first sortie was flown by the commander of No. II Squadron, Wing Commander Al Threadgould with Flight Lieutenant Tim Robinson as navigator who, due to the lack of tankers, took off with a pair of 2,250 liter drop tanks under the wings and two 1,500 liter tanks beneath the fuselage which dramatically boosted their range.

However, a fuel feed problem forced the two to abort the mission and another pair of Tonkas, flown by Squadron Leaders Dick Garwood and Jon Hill and by Flight Lieutenants Brian Robinson and Gordon Walker, took over the sortie for them.

The two aircrews were able to bring several images of a Scud launcher in firing position back home but the bad weather prevented attack aircraft from destroying the launcher before it was driven away.

Garwood revealed some details of that sortie in the book Gulf Air War Debrief: “It was a very, very black night: probably one of the darkest I have flown on. Once you get out over the desert, especially over Iraq, there are no lights on the ground. You are flying very low. We saw the odd Bedouin encampment flash by on the left-hand side of the wing.” After they landed back to Dhahran, a single flack hole was found in the top of the rudder of their Tornado.

Noteworthy, most of the Scud hunt missions lasted from 2 ½ to 3 hours with 20 to 60 minutes over Iraq, except for one sortie flown by the Flight Lieutenants Rick Halley and Hangus Hogg, of No. II Squadron, which protracted for 4 hours and 25 minutes.

A typical reconnaissance mission involved three to four line searches of a strip of road or a section of river and the aircrews always operated in pre-planned routes to avoid Iraqi air defenses. For this type of sortie the normal operating altitude was 200 ft, with hard ride selected on the TFR (Terrain Following Radar) and speeds between 540 and 580 kts.

Other types of missions flown by RAF reconnaissance crews included target overflights before and after the attack to supply detailed imagery material for pre- or post- strike examination and several sorties to provide cover for Special Forces infiltration routes. 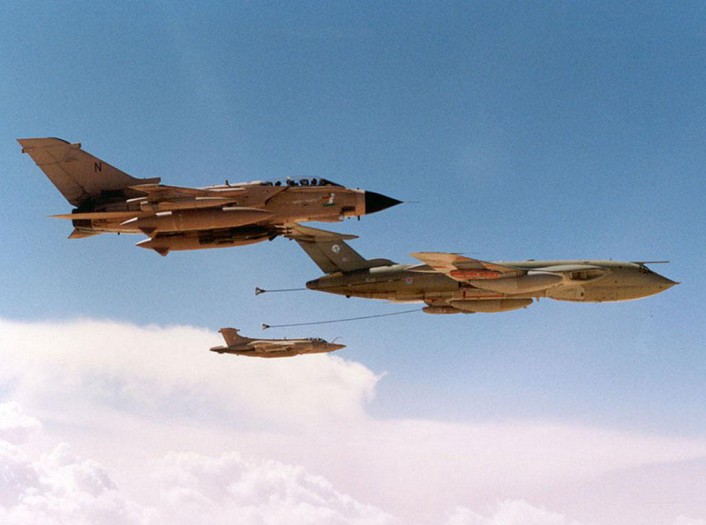 French Navy (Marine Nationale) has recently admitted that the Conficker worm struck some important systems preventing operative units to download their flight plans as databases were infected. Even if warnings about the risk of being […]