The Tornado fighter bomber is one of the platforms already integrated with the GBU-39 SDBs (Small Diameter Bombs).

The GBU-39 SDB is a 250-lb multipurpose, insensitive, penetrating bomb with a blast-fragmentation warhead for stationary targets.

These bombs are equipped with deployable wings for extended standoff range that open upon release allowing the GPS-guided bomb to glide for several miles before hitting the target with accuracy.

GBU-39s are quite small: they are usually carried in two pairs underneath the fuselage (on tactical jets) or on the underwing pylons (on the AC-130W that is the largest aircraft to use this kind of bomb).

Among the Lessons Learned of the Air War in Libya, there was the need to employ SDBs to improve accuracy from distance and reduce collateral damage; a GBU-39 launched at high-speed from high altitude can travel for as much as 50 miles, allowing the attack plane to remain outside the range of most SAM (Surface-to-Air Missile) batteries.

The SDB is currently integrated on the F-15E Strike Eagle, the F-22, that with software increment 3.1 is able to carry 8 GBU-39s, and the AC-130W whereas all the remaining U.S. bombers (including the F-35) will get the slender bombs in the future. The Israeli and Italian air forces have procured this kind of weapon as well, with the latter planning to integrate the SDBs on the Tornado aircraft upgraded to the enhanced RET 7 and 8 standards.

Separation tests from the Italian Tornado were announced in 2013 and planned from late 2015; the images in this post, taken near Decimomannu airbase, in Sardinia, Italy, by photographer Giampaolo Mallei, show a Panavia Tornado MLU (Mid-Life Update) carrying four SDBs during the testing campaign conducted by Alenia Aeronautica. 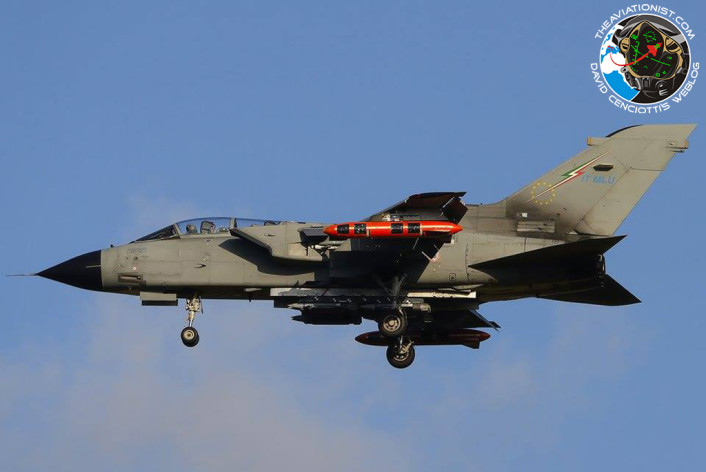 An unusual sight: hook down landing on runway

Arrested landings on aircraft carrier require a tailhook to catch one of the four deck’s wires but almost all military planes, even the ground based ones have a hook, that is used in emergency landings: […]

This is the effect of an F-15E Strike Eagle live weapons drop.

F-15E Strike Eagles from RAF Lakenheath dropped 48 live GBU-12s along the northern border of Scotland. Ever wondered what the effect of a GBU-12 bomb blast may look like? The image above gives a hint. […]