You don’t see so many C-130H and J models take part in a massive Elephant Walk very often.

On Dec. 6, a flight of 24 C-130 H and J models from the 317th AG and multiple Air National Guard Bases from across the United States took off from Dyess Air Force Base, Texas, as part of a U.S. Air Force Weapons School large-scale mobility exercise dubbed Joint Forcible Entry Exercise 14B.

The Exercise, which featured 100 aircraft in total, has the aim to test the ability of the participants in the weapons school courses to plan and execute synchronized aircraft movement from geographically-dispersed bases, large formations in a simulated contested battlefield.

The scenario includes missions to infiltrate and exfiltrate combat forces via airdrops and combat landings on degraded landing strips through heavily defended airspace.

The photo in this post shows the 24 C-130s taxiing in close formation right before a minimum interval takeoff, in what is referred to as an “Elephant Walk.” You can click on the image below to open a hi-rez version of the shot, and count the planes that are depicted in it.

Elephant walks are periodically performed at airbases all around the world to prepare squadrons for war-time operations and test crews ability to quickly and safely prepare aircraft for a mass launch; depending on the purpose of the training event Elephant Walk may terminate with the aircraft taking off in sequence, or taxi back to the apron.

In April 2012, nearly 70 F-15E Strike Eagles took part to one of the largest Elephant Walk to date at Seymour Johnson Air Force Base, N.C. 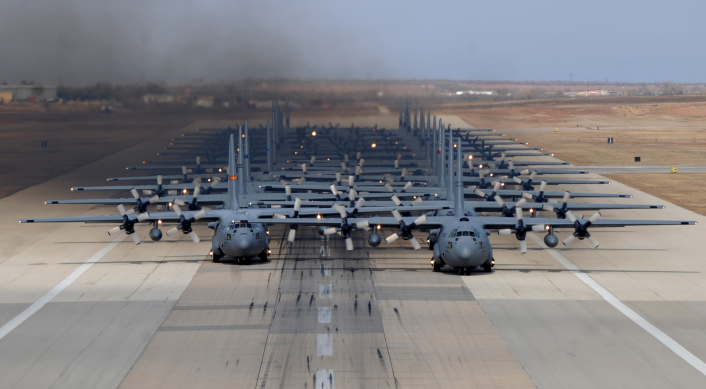 Here are the images of the first ten U.S. F-15 fighter jets deploying to Israel for “Juniper Stallion 13”

Real World Capability Aside, Which Country Puts on The Best Gen. 5 Demonstration? Military aviation fans and spotters can’t have a conversation about Russian and American aircraft without making comparisons. Whether it is the dogma […]