According to the roadmap just published, in the next 25 years Pentagon aims at fielding military unmanned systems that will be autonomous and able to perceive, analyzw, correlate and make decisions or react without human intervention.

An obvious move that, among all the other implications, will also reduce the amount of UAS (unmanned aerial system) mishaps, the majority of those are caused by the human factor.

DoD vision up to 2038 is quite clear: drones are the key for U.S. military. And will be even more in the future, when the U.S. will have to face several problems: Pressure for reductions in federal budgets; U.S. military rebalance; Nuclear Proliferation; Violent extremism at home and across the globe; Threats in the Cyberspace (as in land, sea or air and space); Enemy Unmanned Systems.

Noteworthy, the Pentagon has added a new domain to its battlefield: cyberspace.

Acknowledging the risk of drones being hacked or hijacked, the DoD envisages higher data rate cryptography, and open standards to enhance encryption of data links and protect communicated information.

In the future, drones will be increasingly used to fulfil different tasks, including those currently not assigned to unmanned systems: “Although currently prohibited by policy, future capabilities by unmanned systems could include casualty evacuation and care, human remains evacuation, and urban rescue. The unmanned vehicles are intended to mitigate risk to the maximum extent by reducing the requirement to operate manned vehicles when the weather, terrain, availability, and enemy pose an unsuitable level of risk.” 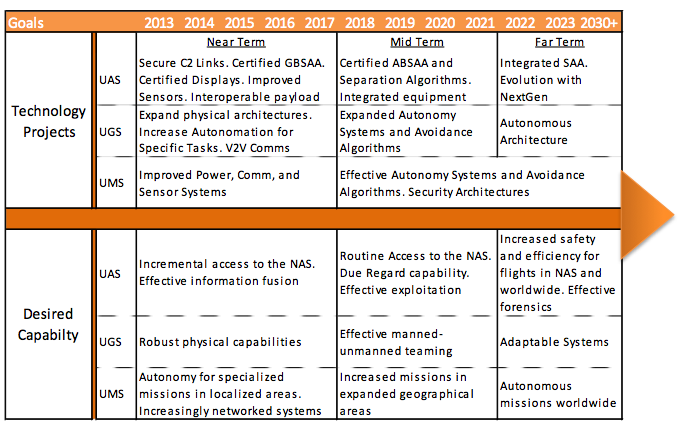 If the long term vision foresees squadrons of robots conduct different missions in the battlefield, there will be a point in the near future when manned and unmanned systems will have to team up. It’s what the report calls MUM-T [Manned-Unmanned System Teaming].

“A force of the smaller, more agile manned-unmanned systems of the near future will enable DoD to mobilize quickly to deter and defeat aggression by projecting power despite A2/AD challenges. MUM-T will provide the following key capabilities: Defeating explosive ground surface, sub-surface (tunnel), and sea hazards from greater standoff distances; Assuring mobility to support multiple points of entry; Enabling movement and maneuver for projecting offensive operations; Establishing and sustaining the shore lines of communications required to follow forces and logistics; Protecting austere combat outposts; Providing persistent surveillance to detect and neutralize threats and hazards within single- to triple-canopy and urban terrain.”