The fighter jet, most probably flying a reconnaissance mission, performs a couple of flybys over the naval units involved in the exercise causing some Russian Marines to embrace their rifles and point them against the “enemy”. 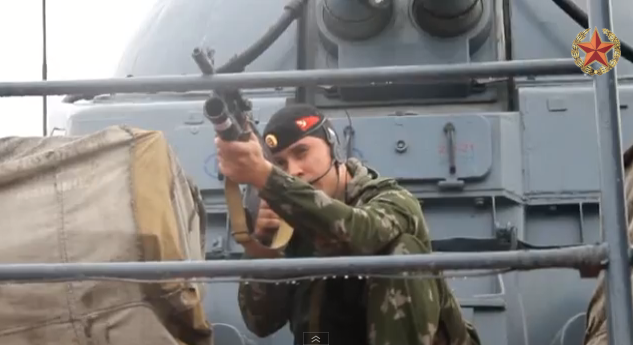 The episode proves the drills, involving, among the others, Russia’s Baltic fleet as well as transport vessels from Northern Fleet and Black Sea Fleet, were closely watched by the neighborough countries.

And, whereas close encounters are often documented from the Western side, there are few events that are filmed or photographed from the Russian one.

On Sept. 16 just before the Zapad 2013 started eight Russian Air Force planes skirted Estonia’s airspace on their way from St Petersburg region to Kaliningrad Oblast; fighter planes from Sweden, Finland and NATO planes situated in Lithuania were scrambled to intercept the Russian fighter jets (including some Su-27 Flankers).

H/T to Lars-Gunnar Holmström for the heads-up