The following image is going viral on social networks.

The reason is obvious: is an absolutely stunning photograph, just released by the U.S. Marine Corps, showing Capt. Christopher Prout with Marine Fighter Attack Squadron (VMFA) 232, Marine Aircraft Group 11, 3rd Marine Aircraft Wing as he shoots an AIM-7 Sparrow missile from an F/A-18C Hornet near Tyndall Air Force Base, Florida, on May 16, 2013.

VMFA-232 moved to Tyndall for a deployment for training (DFT) used to prepare the squadron for future combat and contingency operations. 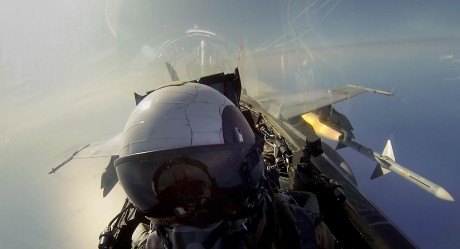 “Green Tops” MV-22 osprey tilt-rotor aircraft fly the President’s supporting staff and Secret Service agents. On May 23, Donald Trump traveled to New York City in one of the Presidential VH-3D helicopters operated by the […]

U.S. MV-22 Osprey and KC-130J aircraft based at Sigonella amid escalating crisis in Libya visit Malta

Last month, the U.S. transferred about 500 Marines from Moron airbase, Spain to Sigonella in Sicily to be ready for rapid deployment if any new attacks occurred in Libya. Few days earlier, 15 people had […]