Before pilots can actually land aboard aircraft carriers, they have to practice in the simulator and at the field during FCLP.

Performed on a simulated aircraft carrier ashore, FCLPs provide pilots with realistic training (except the runway is 10,000 ft by 200 feet wide, versus an actual carrier deck that is only 700 by 100 feet). 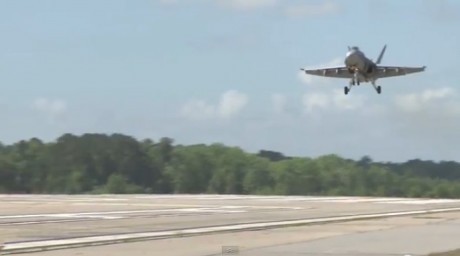 FCLPs are a series of approaches followed by touch-and-goes, which are observed by a landing signal officer who grades and critiques each landing. A normal FCLP consists of about eight to 12 touch-and-goes and lasts about 45 minutes.

Almost every aviation geek has seen the famous film Top Gun. But few of them know that if Maverick and Goose flew an F-14B they would not have had to eject during the flat spin […]

U.S. aircraft carrier launched strikes against Daesh from Mediterranean for the first time