For the second time in three days, the Israeli Air Force has conducted air strikes in Syria.

If the first raid hit a convoy believed to be moving Fateh-110 missiles destined to Hezbollah, the one launched in the night between May 4 and 5 pounded several targets located near Damascus:  the Jamraya scientific research centre (the only one officially confirmed by the Syrian TV), some missile fuel storage depot as well as the 4th Brigade of the Republican Guard’s barracks.

By the type of targets allegedly hit by the last raid we can assume that Israel is not only worried that the Fateh-110 missiles coming via Lebanon could reach Hezbollah, but also that Tel Aviv wants to degrade the Syrian capability to use its chemical weapons by neutralizing its Scud missiles fuel stocks.

In other words, since destroying CW warehouses could be difficult and dangerous, they are attacking the missiles fuel depots.

Indeed, the following video most probably shows the massive explosion of a fuel depot hit by Laser Guided Bombs.

A mushroom cloud that reminds that of nuclear weapons (even if, quite obviously, no nukes were dropped).

The attack on the Republican Guard (provided the elite unit was not hit just because it was next to the missiles to defend them), may have been a message to Assad: Israel can hit his closest ring of defense against the rebels.

Regardless of the purpose of the attack, what is quite evidend is that the Israeli fighters can almost freely violate (Lebanon and) Syria’s airspace without being disturbed too much by the local air defenses.

As explained after the Israeli air strike on a weapons convoy and military complex near Damascus, in January, the IAF bombers entered and egressed the Syrian airspace almost completely undetected thanks to a huge Electronic Warfare support. 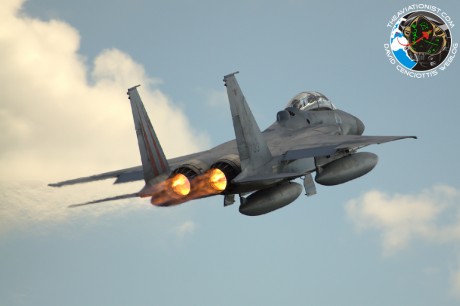 An integral part of the “package” involved in the air strikes over Syria must have been Israeli ELINT aircraft and the Suter airborne network system capable to blind the Syrian radars, monitor them, or inject misleading information.

Perhaps many Assad’s air defenses have been sabotaged or hit by the rebels activity but the area is still believed to be heavily defended by several Soviet-made SAM (Surface to Air Missile) batteries.

A major role, especially in the phases preceding the attack was also played by drones, performing ISR (Intelligence Surveillance and Reconnaissance) missions in South Lebanon and, possibly, along the border with Syria.

The IAF operates a huge fleet of UAVs of various kind, used for various purposes, including pinpointing missiles being moved from Lebanon to Syria.

Noteworthy, according to some readers of The Aviationist, there are so many Israeli drones flying over Lebanon lately, that the Israeli Air Force mistakenly shot down one of them on Apr. 25 near Haifa. A blue-on-blue episode or just speculation?

According to Asharq Al-Awsat newspaper that cites anonymous western diplomats, the Israeli Adir was inolved in at least one air strike in Iraq. Here’s everything we know. On July 19 and again on Jul. 28, […]