The following images were taken at RAF Lossiemouth by The Aviationist’s contributor Alessandro Fucito, during the recent Exercise Joint Warrior 2013.

Five French Navy’s Atlantique II (ATL2) MPA (Maritime Patrol Aircraft) were deployed to Dakar, Senegal, in support of Operation Serval in Mali. Indeed, the aircraft were not only used to perform ISR (intelligence surveillance reconnaissance) in West Africa, but were also employed as bombers: according to several sources, numerous GBU-12 250 kg laser guided bombs were dropped in the Sahel.

The ATL2 can accomodate up to four GBU-12s but it can’t self designate targets. At least, not yet. 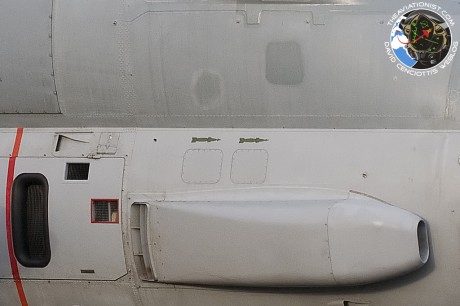 What kind of target did the Israeli Air Force really hit in Syria?

Twice between May 3 and 5, the Israeli Air Force conducted air strikes in Syria using Precision Guided Munitions. The first raid hit a convoy believed to be moving Fateh-110 missiles destined to Hezbollah, whereas […]

With Paris Le Bourget currently making the news and 50th NATO Tiger Meet held at Cambrai in May, France has been the place to visit for aviation journalists and aircraft spotters during the last few […]