Last week we reported about the alleged deployment of seven B-1B strategic bombers to Guam exposed by the radio comms in the clear intercepted by an airband listener.

Around  09.00 pm CDT (GMT -5) on Apr. 3, from his station in Amarillo, Texas, Steve Douglass heard “Dark flight of seven” (that is to say seven B-1B bombers from Dyess Air Force Base, Texas), coordinating their rendez-vous with their tankers and then request the latest weather report for Guam airbase.

The unusual amount of planes flying at the same time, the timing (few hours after last Kim Jong Un’s threat) and the request for wx (weather) at Andersen Air Force Base, suggested the planes were heading to the base in the Pacific as a reinforcement to the U.S. presence in the region (and/or to prepare for a preemptive strike on North Korea).

However, on Apr. 6, talking to FP Killer Apps, a U.S. Pacific Air Forces spokeswoman said that the planes were not at Andersen Air Force Base and didn’t even stop through Guam.

Whilst someone doubted the veracity of the report, speculations and rumors saw the planes either deployed to Shemya (in the Aleutian islands) or Eielson, Alaska, or elsewhere, from Australia, to Diego Garcia, from the Philippines to Iwo Jima, etc.

In order to discover where the seven planes had landed, we asked the PACAF command to confirm whether the B-1s were deployed in their theater or operation.

On Apr. 8, few hours later sending the question to the PAO, an extremely kind spokeswoman replied that “the B-1s are [were] not operating in or deployed in the Pacific Command(PACOM) theater of operations.”

To a further question about eventual training flights in the region in the previous week or so, the PAO answer was: “The B-1s have not operated in or deployed in the PACOM theater of operations in support of PACAF or PACOM during the time referenced.”

Hence, the B-1s were not deployed in the Pacific and did not operate there in the recent past.

Still, since Douglass had not only heard but also recorded the Dark flight of seven B-1, those Lancers had to be somewhere. 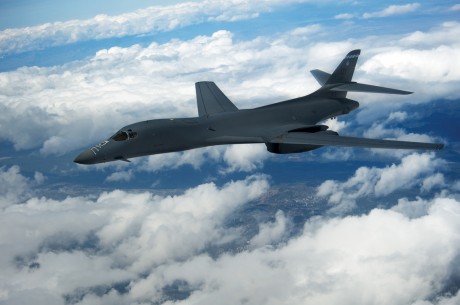 Based on the time Douglass heard the B-1 flight of seven, we started browsing through LiveATC.net archives for past Abilene/Dyess TWR radio feeds (LiveATC is a web portal that lets you listen to live radio communications between aircraft and Air Traffic Control agencies at various locations across the world). For sure, since the planes had departed from Dyess, they were issued a standard ATC clearance prior to take off mentioning thecdestination airport and we just needed to hear that conversation.

We found what we were looking for in the archive audio file with comms recorded between 01.30Z and 02.00Z. From 01.32Z you can hear Dark 35, Dark 36 and Dark 37 taxiing for departure. It’s not clear how many aircraft each “Dark” includes but “Dark 35” immediately after take off called the APP control as “Dark 35 formation” meaning that it was not a single ship.

Dark 35, 36 and 37 were issued three separate clearances, each having Dyess Air Force Base as final destination: in other words, the aircraft took off for a round trip mission.

It’s not clear whether Dark 35, 36 and 37 were, in total 7 planes or rejoined with other Dark flights taken off earlier than them; still, they took off, refueled and returned to Dyess (as all the other B-1s we heard departing from there before and after 02.00Z).

That said, why they asked for weather in Guam in the clear remains a mystery.

Most probably, during a normal training flight in which they trained for a rapid deployment in the Pacific region in response to a crisis, they deliberately broadcast their presumed destination in order to let Pyongyang know there was a flight of B-1 bombers on the way.

A ploy to achieve deterrence through disinformation in times of sequestration and groundings? Psychological warfare?

Several media outlets have filmed a U.S. B-1 circling over Kobane during the air strikes on ISIS. Footage shows flashing light come out of the plane: most probably nothing more than a strobe light. On […]

Reports coming out of Seoul suggest that its reclusive neighbour North Korea has started to wage a jamming campaign against the most wired country in the world, with the intention of jamming GPS signals. 553 […]

Meanwhile, in Guam: B-52 bomber is loaded with (dummy) Air-Launched Cruise Missiles