Last year, we published a video recorded and edited by the 67th FS “Fighting Cocks”, from Kadena airbase, to commemorate the winning of the 2011 Raytheon Trophy, a trophy that is given to the top air-to-air squadron in the USAF.

Now, the 67th FS has released some more stunning footage showing the squadron’s F-15C Eagle dofigthing during training mission over Kadena and the Pacific Ocean.

Update: thanks to the readers of The Aviationist who have noticed that the new footage is actually a shorten version of the old one made in 2012 for the Raytheon Trophy.

Unfortunately, the 67th FS is among the U.S. Air Force combat units grounded or affected by budget cuts imposed by sequestration: it will maintain basic mission capability (hence, it will fly much less than usual) through Sept. 2013.

The 67th FS provides air defense and air superiority in the Asian-Western Pacific area of operations. 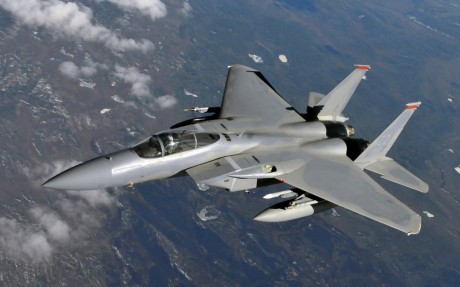 It’s the second time a Super Galaxy lands on nose after gear malfunction in less than one year. On Mar. 15, an Air Force Reserve Command C-5M Super Galaxy performed an emergency landing at Joint […]