The following image shows a French Army Tigre helicopter supporting an armored column on its way to Tessalit, the northernmost location reached so far by the French troops involved in Operation Serval.

The attack chopper supports the convoy in proximity and at ultra-low level, ready to engage any suspect vehicle along the route. 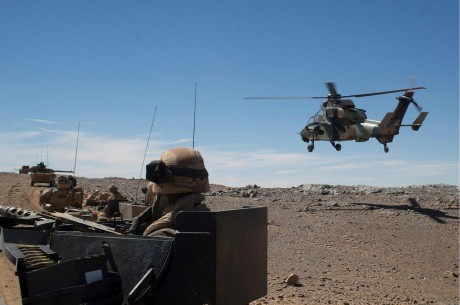 Tessalit in northern Mali was taken in the morning of Feb. 08, by the French paratroopers that seized the runway for the arrival of a C-160 Transall airlifter that carried special forces.

These are the lessons the French have learnt from the Mali Air War, so far

Although the military campaign in Mali is still in progress, we can already draw some of the lessons the French Armed Force may have learned from this low intensity air war. 1) The need for […]

A U.S. Air Force KC-135 and French Rafale involved in an mid-air emergency over Mali. Taken from a 100th ARW (Air Refueling Wing) KC-135 Stratotanker during what seemed to be (at least until then) a […]