Not much media footage is coming out of Mali and the only means to get interesting updates about what is going in West Africa is through the images and videos released by the French Armed Forces.

After showing the world the drone camera footage of the Foreign Legion paradrop over Timbuktu few days ago, here’s some video showing French Tigre helicopter gunships attacking targets inside Mali.

French forces have now taken the airports at both Timbuktu and Gao: once on the ground the troops met very little resistance from rebels and quickly gained control of the airport at Timbuktu whereas Malian forces secured the area. It was found that the runway at Timbuktu was littered with obstacles so much so the French had to para drop the 17th Airborne Engineer Regiment and its equipment to clear the obstacles and return the runway to active use and the ability to receive air traffic.

Timbuktu airport has a runway that is just under 7,000 feet long, more than enough to operate Transall flights. 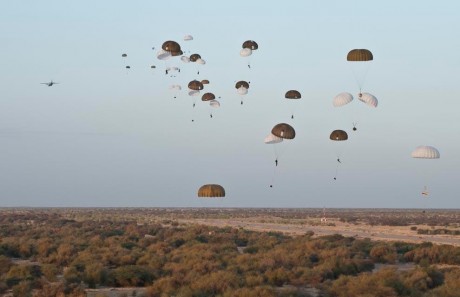 Air operations are continuing from N’Djamena (Chad), Bamako (Mali) and Dakar (Senegal) with three U.S. KC-135 Tankers usually based at RAF Mildenhall, in the UK, operating since the weekend from Moron Air Base (Spain).

Fitted with the hose and drogue system to “serve” probe equipped combat planes, the aircraft are believed to cross the Algerian airspace to get into the area and refuel Rafale and Mirage jets.

As already explained, a RAF Sentinel R1 is operating out of Dakar, Senegal also, although no further information with regards to it actually being used has come out. The British ISR platform should perform the same role it played in Libya.

Along with the RAF’s C-17s and the Canadian C-17,  U.S. Globemaster airlifters have also joined in and Sweden will also supply 40 flight hours of a C-17 based at Pápa airbase, Hungary, through NATO Strategic Airlift Capability,  to help France move troops and equipment to Mali.

Belgium has also supplied two Agusta 109 helicopters which have been modified for MEDEVAC operations and are due to leave Moelsbroek on Jan. 30 aboard a chartered IIluyshin IL-76 heading for Bamako.

The UK has also said it will send 300 troops to train local forces, whereas Italian Government has not yet approved the plan to commit three planes, including a KC-767A tanker, to the Mali operation.

The RAF Sentry fleet will retire later this year after 30 years of service, freeing resources for the E-7A Wedgetail which is set to enter service in 2023. A Royal Air Force E-3D Sentry AEW1, […]