Recent test flights of the Shenyang J-15 fighter aboard the Chinese carrier Liaoning highlighted the development of the People’s Liberation Army Navy’s (PLAN) nascent aviation forces. The capabilities and performance of the J-15 invite comparison with other navies that operate carrier-based fixed-wing air assets. The strengths and limitations of the J-15 offer insight into the expected role of first generation Chinese carriers.

The Liaoning is the refurbished ex-Soviet Kuznetsov class carrier Varyag, which was acquired from Ukraine in 2001. The vessel retains conventional arresting gear but is equipped with a ski-jump launch ramp. This configuration requires aircraft with high thrust-to-weight ratios during flight operations. As a result, the takeoff weight, fuel capacity, and ordnance load of the J-15 are limited.

Kuznetsov class carriers such as Varyag were conceived to provide air-cover to Soviet surface action groups. The reduced takeoff weight of the J-15 likely limits the fighter to anti-air warfare missions, armed with a combination of PL-9 and PL-12 missiles. The carriage of air to surface weapons is possible but would greatly restrict fuel loads and resulting combat radii.

Extending the range of the carrier-borne J-15 would require the use of land-based tanker aircraft or carrier based J-15’s equipped with buddy refueling pods. While each J-15 is equipped with an in-flight refueling probe, the People’s Liberation Army Air Force (PLAAF) does not possess a mature air refueling capability. The PLAAF operates a small number of HY-6 tanker aircraft. Orders for Russian IL-78 tankers were placed in 2008 but are currently being renegotiated. J-15 aircraft could also utilize the UPAZ-1A buddy refueling pod, although the ability of a navalized Flanker variant to transfer a tactically significant fuel load has yet to be demonstrated in Chinese or Russian service.
Dedicated tanking missions would also severely limit sortie generation rates during combat operations.

The introduction of the J-15 marks a notable milestone in the development of Chinese naval aviation but does not greatly expand PLAN capabilities. The limited ordnance load and combat radius associated with ski-jump equipped carriers are aligned with Chinese anti-access and area denial doctrine, as opposed to the power projection focus of catapult equipped western carriers. 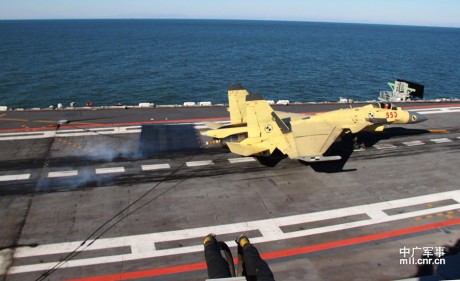 Wanna know where the new Chinese aircraft carrier will be in the next few days? Here it is. A website gives you the coordinates.

This time you don’t need a satellite to get a glimpse of the Varyag in the Yellow Sea. If you wish to know where the refurbished Chinese aircraft carrier will be until Dec. 29, you […]