Saturday Dec. 1, saw North Korea announce that it was going to try to launch another long-range rocket before the end of the year few months after the last failed attempt. It’s thought that this would take place sometime between Dec. 10 and Dec 22.

In an article published by the New York Times the Commander of American forces in the Pacific region said that warships equipped with advanced radar and other ballistic-missile defense systems were being relocated to monitor the launch.

During a Pentagon news conference Admiral Samuel J. Locklear III mentioned the repositioning of the warships to monitor the launch and learn as much as possible. Talking of the movements he said “It should seem logical that we’ move them around so we have the best situational awareness.”

He went on to mention the systems on the warships: “And to the degree that those ships are capable of participating in ballistic-missile defense, then we will position them to be able to do that.” The goal would be to work out where the missile is heading (as done with the previous launches) what its likely to do, and more importantly who would it potentially threaten; hence it would seem that the movements are also to allay any worries to allies in the area.

Guided missile destroyers USS Fitzgerald and Benfold are moving into position. Noteworthy, the U.S. have to aircraft carrier in the Pacific theatre right now: the only Pacific flattops is currently off Pakistan conducting maritime support operations in the Fifth Fleet Area Of Operation. 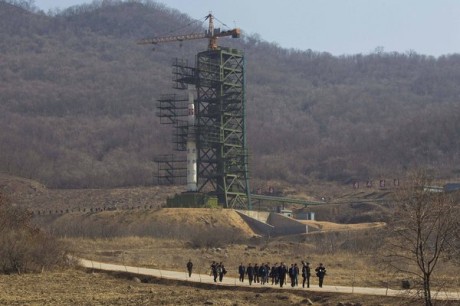 Alleged Chinese ABM Test Coincides with North Korean Ballistic Missile Test. A commercial pilot flying a Cargolux 747 from Hong Kong to Baku has shot photos of what is believed to be a secret Chinese […]

Following the yesterday B-2 Spirit “extended deterrence” mission over South Korea, Kim Jong Un has approved an attack plan on targets located in the Pacific and mainland U.S. Photos published in KCNA state agency and […]