Known as CHAMP, Counter-electronics High-powered Advanced Missile Project, the adveniristic weapon may one day change modern warfare fought by troops, aircraft increasingly dependent on electronic and data systems: it can hit a target with a high-powered microwave pulse capable to defeat electronic targets with little or no collateral damage.

Hence, a weapon that does not kill nor cause harm to people. At least not directly.

CHAMP missile’s test target was a two story building: the first burst of High Power Microwaves caused inside rows of personal computers and electrical systems to turn on as a consequence of the powerful radio waves that hit them. Moments later the monitors were knocked out, demonstrating that both the PCs and the electrical systems had been successfully hit without collateral damage.

According to Boeing Phantom Works, seven targets were hit using CHAMP’s high power microwaves in the one-hour test that degraded and defeated the electronics inside the test buildings. 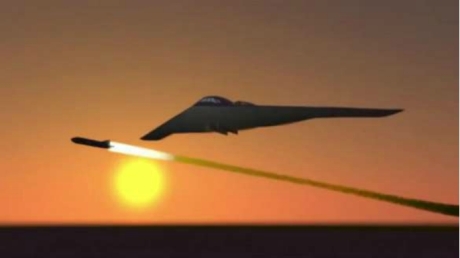 Even if the artistic impression above shows a B-2 as the launch platform for the CHAMP, the Boeing video shows technical people working around an Air Force B-52 strategic bomber, probably used for the testing phase and Oct. 16 launch.

About David Cenciotti 4091 Articles
David Cenciotti is a freelance journalist based in Rome, Italy. He is the Founder and Editor of “The Aviationist”, one of the world’s most famous and read military aviation blogs. Since 1996, he has written for major worldwide magazines, including Air Forces Monthly, Combat Aircraft, and many others, covering aviation, defense, war, industry, intelligence, crime and cyberwar. He has reported from the U.S., Europe, Australia and Syria, and flown several combat planes with different air forces. He is a former 2nd Lt. of the Italian Air Force, a private pilot and a graduate in Computer Engineering. He has written four books.
Website

As reported by various media outlets, on May 19 and 20 the North Koreans launched four short range (120 km) missiles. Two launches were fired on Saturday morning, another one in the afternoon, and the […]

India has signed a new contract with Russia that settles the cooperation regarding the BrahMos missile. With the agreement signed in 1998, New Delhi and Moscow had initially agreed for a 15-year partnership, then extended […]