Among several unconfirmed reports of an Israeli F-16 shot down and two crew members under custody during the third day of military offensive in Gaza, images of what could be the first Israeli Air Force drone downed or lost during Pillars of Defense, were released by Hamas.

Even if the Israeli government spokesman tweeted that the drone that Hamas showed on Al-Aqsa TV is not Israeli and not in service in the IDF, it actually seems to be one of the Israel’s robots filling the skies over Gaza.

The drone, one of those providing targeting and ISR (Intelligence Surveillance Reconnaissance) capabilities in the area, is a Rafael Skylite B UAV.

The Skylite B is a mini-UAV (unmanned aerial vehicle) that uses an electro-optic payload (located on the nose of the drone), stabilized and outfitted with gimbals.

The tiny robot is among the tactical family of drones, those usually deployed for use by infantry forces and which is man-portable (in backpacks) and enables short periods of reconnaissance and surveillance.

The Skylite B is carried in a backpack, easily assembled, launched with a catapult and landed back using a parachute and an air bag.

Provided that it is not a very accurate prop and it was really captured on Nov. 15 (as happened in Syria, several fake images as this one are being spread on the Internet), based on the low quality video, the little damaged UAV was not shot down: it most probably crash landed in the Gaza strip and was later recovered by Hamas. 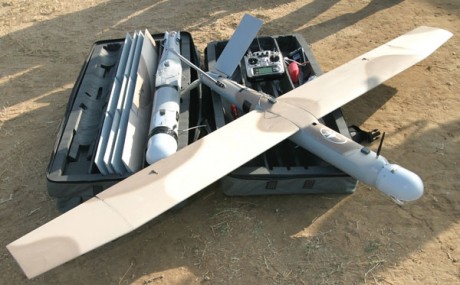 Latest Israeli Air Strikes May Escalate if Iranian Involvement in Region Grows. Israeli combat aircraft secretly pounded targets in the Hisya area of Syria south of the city of Homs on Wednesday, Nov. 1, 2017. […]